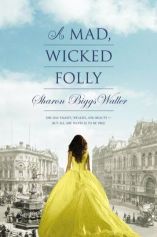 Welcome to the world of the fabulously wealthy in London, 1909, where dresses and houses are overwhelmingly opulent, social class means everything, and women are taught to be nothing more than wives and mothers. Into this world comes seventeen-year-old Victoria Darling, who wants only to be an artist—a nearly impossible dream for a girl.

After Vicky poses nude for her illicit art class, she is expelled from her French finishing school. Shamed and scandalized, her parents try to marry her off to the wealthy Edmund Carrick-Humphrey. But Vicky has other things on her mind: her clandestine application to the Royal College of Art; her participation in the suffragette movement; and her growing attraction to a working-class boy who may be her muse—or may be the love of her life. As the world of debutante balls, corsets, and high society obligations closes in around her, Vicky must figure out: just how much is she willing to sacrifice to pursue her dreams?

I was enchanted first by the melodic title, second by the book description. An historical YA novel set in London, early 20th century, revolving around art and the suffragette movement? It sounded wonderful, and debut novelist Sharon Biggs Waller truly delivered on the promise of a fantastic read.

Not quite knowing what to expect, I thought that the majority of the novel might center around Vicky’s love life and her promised marriage to wealthy Edmund, but this was not the case! At the heart of A Mad, Wicked Folly is Victoria’s fervor for her art, her desire to freely express herself through art, to pursue education, and to make a name for herself. All things, as we understand historically- circa 1909- were not an option for young women. While there is a wonderful distraction, muse, possible genuine love for Victoria by the name of Will- an engaging man who we meet early on- their relationship doesn’t overtake or dampen this very satisfying and rich story. In fact, I thought that Vicky and Will’s connection was made all the stronger because of our protagonist’s growing passions for the world around here.

In a few turns and revelations- some unanticipated!- the author kept me on my toes and did not take easy turns or outs with the story, or with the characters. For example, Edmund could have been made out to be an easy villain, an easy man to flat-out hate, so that we would sympathize entirely and only with Vicky and a new man. But not so! Moreover, the interplay between Vicky’s growing desperation for liberation and choice with that of the increasing uproar and menace regarding the women’s suffrage movement is, I think, very well done, and adds an even deeper layer to the story.

Overall, I found A Mad, Wicked Folly to be sensitively and passionately written and thoroughly enjoyable. I love the intense detail that have gone into everything from the fashion, to decor, to the artists and real-life advocates of suffrage. I also adore that Victoria started off such a full character and grew even more into an introspective, aware, driven, resourceful person; a character the author seems to adore very much. I would recommend this novel for those who enjoy historical fiction (of course!) be it YA or adult; fans of Katherine Longshore, Jessica Spotswood, Y.S. Lee, Michelle Cooper, Elizabeth Ross, or Jennifer McGowan. And if you’re not much of a historical fiction reader? Give this novel a try. A Mad, Wicked Folly is, simply put, a captivating story with compelling characters.

Note: This review, written by me, originally appeared on Fabbity Fab Book Reviews.