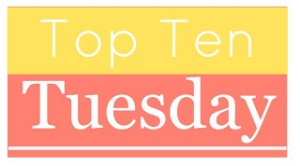 This week’s focus is all about our top ten favourites of a particular genre. I have decided to go with comic strips, as it’s a big bookish love of mine and something I don’t talk about too often here! My picks range from the classic to critically acclaimed, to series that just delight me to no end. So much wonderfulness in these strips, I highly recommend any of these strips to any humour/comics reader!

Here are my top ten- with the first two arguably tied for my all-time number one favourites:

Sherman’s Lagoon by Jim Toomey. I first started reading Sherman’s Lagoon about…15 years ago or so, and haven’t stopped or missed any of the collections. Zany, belly-laugh inducing, and consistently good. It is also a shared bookish favourite of my dad and I!
Cul de Sac by Richard Thompson. A superb comic strip: a deeply funny, wise and incredibly illustrated and written comic from the late Richard Thompson. All I can say about this one is to try it if you haven’t yet. A little taster of the strip is below.
Pearls Before Swine by Stephan Pastis. Out of any authors on this list, I think I have referred to Pastis the most, if not mostly for my love of his children’s series Timmy Failure. Pearls, as I probably mentioned in another post is sharply written, often caustic, but balanced with moments of sudden, intense thoughtfulness and consideration. And of course, it is a hoot as well.
FoxTrot by Bill Amend. I have loved this comic for years and years now! As with Sherman’s Lagoon or Baby Blues, this is go-to comfort reading (well, re-reading!). Amend does family dynamics so well, and makes the characters (who, as with the Simpson’s lot, don’t age) and their well-formed habits into fresh, just about limitless storylines.
Baby Blues by Rick Kirkman and Jerry Scott. Long, long before I became a parent, I was a huge fan of Baby Blues. Kirkman & Scott make a strip generally about becoming parents and parenting (and the frustrations and utter joy of kids) so readable, crazily likable and relatable. I’ve read and reread the collections numerous times and they still make me laugh out loud.
Peanuts by Charles M. Schulz. The main characters are so utterly familiar to me, I can’t imagine growing up without knowing them and their quirks! Sally is one of my stand-out characters- so unexpectedly hysterical, I think, that she doesn’t get enough credit. And who cannot, at one time or another, relate to Charlie Brown’s ennui and agony, or Lucy’s temper and misplaced affections?
Calvin and Hobbes by Bill Watterson. So much has been said and written about this critically acclaimed, beloved comic strip. I have grown to appreciate the wonder of this series- and the writing– even more as I get older.
Grand Avenue by Steve Breen. I wish the entirety of this series was available in print, but alas, only the first collection! Pulitzer Prize winning cartoonist Breen does a fantastic job in this series; a great premise with standout and very funny characters, this is a consistent delight to read.
Herman by Jim Unger. We’ve all read at least a Herman comic at one point or another, haven’t we? I remember seeing dental-related Herman comic strips at my dentist’s growing up! (I always thought they were funny and true). So very dry and so very funny, Herman is a kick in the pants.
The Far Side by Gary Larson. Another critically acclaimed, much lauded, beloved comic strip series! I’ve been revisiting some of the collections this year; so consistently weird, dark and riotous.

Honourable mentions:
Mutts by Patrick McDonnell
Heart of the City by Mark Tatulli
Mother Goose and Grimm by Mike Peters
Get Fuzzy by Darby Conley

What’s on your top ten this week? Be sure to check out some of the other great lists!