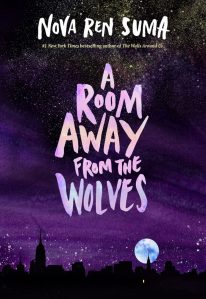 A Room Away from the Wolves by Nova Ren Suma
Source: ARC courtesy of Thomas Allen & Son. Thank you!
Publication: September 4, 2018 by  Algonquin Young Readers (an imprint of Algonquin Books)
Available in Canada through Thomas Allen & Son
Add to your Goodreads
Book Description:

Bina has never forgotten the time she and her mother ran away from home. Her mother promised they would hitchhike to the city to escape Bina’s cruel father and start over. But before they could even leave town, Bina had a new stepfather and two new stepsisters, and a humming sense of betrayal pulling apart the bond with her mother—a bond Bina thought was unbreakable.

Eight years later, after too many lies and with trouble on her heels, Bina finds herself on the side of the road again, the city of her dreams calling for her. She has an old suitcase, a fresh black eye, and a room waiting for her at Catherine House, a young women’s residence in Greenwich Village with a tragic history, a vow of confidentiality, and dark, magical secrets. There, Bina is drawn to her enigmatic downstairs neighbor Monet, a girl who is equal parts intriguing and dangerous. As Bina’s lease begins to run out, and nightmare and memory get tangled, she will be forced to face the terrible truth of why she’s come to Catherine House and what it will take for her to leave . . .

Told from the first-person narrative of teenager Sabina ‘Bina’ Tremper, A Room Away from the Wolves is a blend of tragic fairy tale, ghost story and study of a complicated mother-daughter relationship. As readers get to know snippets of Bina’s life, we come to an understanding of just how painful and strange her life has always been and become. Bina and her mother, Dawn, escaped from Bina’s father, an abusive, heinous man; and while Dawn promised Bina a fresh start in New York, just the two of them, a random encounter soon after escaping forever changed their lives. For Bina, her life that was supposed to be one of freedom and joy of being with her mom became a living hell before long, with a new stepfather she did not care for, and two savagely cruel stepsisters. Bina, when we meet her, has been enduring years of her stepsisters’ abuse, somehow all unknown to her mother. While Bina plans to confront her stepsisters and spoil a big party they’re attending in the woods, there is another layer of complication and sadness Bina faces. Dawn has asked her daughter- after Bina’s incidences involving car theft, crashing her mother’s car, and perhaps even more- to leave their home and stay with family friends for a stretch of time. What Bina hasn’t told her mother is that after her goal of facing off with her stepsisters at the party, she plans to return for her already-packed suitcase and take off to New York and stay at an all-girls boarding residence named Catherine House…the same residence that Dawn had stayed in before giving birth to Bina.

Only, when Bina finally arrives at Catherine House, sporting serious injuries from, readers presume, the party the night before, rushes of uncertainty, haziness, and strange coldness begin. Not just that, but Bina finds that some of the other girls currently staying at the boarding house are…peculiar in a way that she cannot quite place. As Bina’s attention becomes riveted on a boarder named Monet, Bina experiences and witnesses even more bizarre, if not outright terrifying incidences happening in the residence and to the students. After learning some supposed truths about her mother’s time at the boarding house and how she actually left, Bina makes tentative steps toward a discovery- propelled by Monet- of how she might be able to get a second chance and leave Catherine House. While genuinely unsettling, pervasively spooky and disquieting, there is also a core of love at the heart of the story- most notably that of Bina’s love for her mother- that tethers key plot reveals together. Without giving much more away here, I will say that while the story is at times really and truly nebulous (‘What is even happening?, I wondered at many moments) do stay the course of Bina’s story. The closing chapters of the novel are especially heartbreaking, beautifully composed, and serve to tie some ends and casually stun the reader with calls back to Bina’s time at the party, and her mother’s intensely complicated feelings about planning to send her daughter away.

Overall, Suma’s writing in A Room Away from the Wolves is hypnotizing and dreamily beautiful. Truly otherworldly and hypnotic: even when I was uncertain with what might be happening with the main and surrounding characters or where the story might be going, I did not want to break the spell. Had it been possible, I would have finished the novel in one big drink, but instead I settled for finishing the last two-thirds late one night (which only added to general eerie and unsettling feel that the novel was radiating). Readers who enjoy the work of authors such as Brenna Yovanoff, Laini Taylor, Claire Legrand or novels such as Tim Wynne-Jones’s The Ruinous Sweep might particularly relish the intrinsic strangeness of A Room Away from the Wolves, or at least appreciate the beauty in a gorgeously written gothically-tinged ghost story with many unknowns.

Nova Ren Suma is the author of the #1 New York Times bestselling The Walls Around Us, a finalist for an Edgar Award. She also wrote Imaginary Girls and 17 & Gone and is co-creator of FORESHADOW: A Serial YA Anthology. She has an MFA in fiction from Columbia University and teaches at Vermont College of Fine Arts. She grew up in the Hudson Valley, spent most of her adult life in New York City, and now lives in Philadelphia.

The winner will receive 1 copy of A Room Away From the Wolves (HC) by Nova Ren Suma.

Giveaway Details:
-Canada only (full rules found in the T&C on Rafflecopter)
-Giveaway ends on Tuesday Sep. 18th at 11:59 pm EST
-Winner will be drawn randomly through Rafflecopter, contacted via email & will have 48 hours to claim their prize

If you get a chance, I hope you stop by the other great stops on the tour: 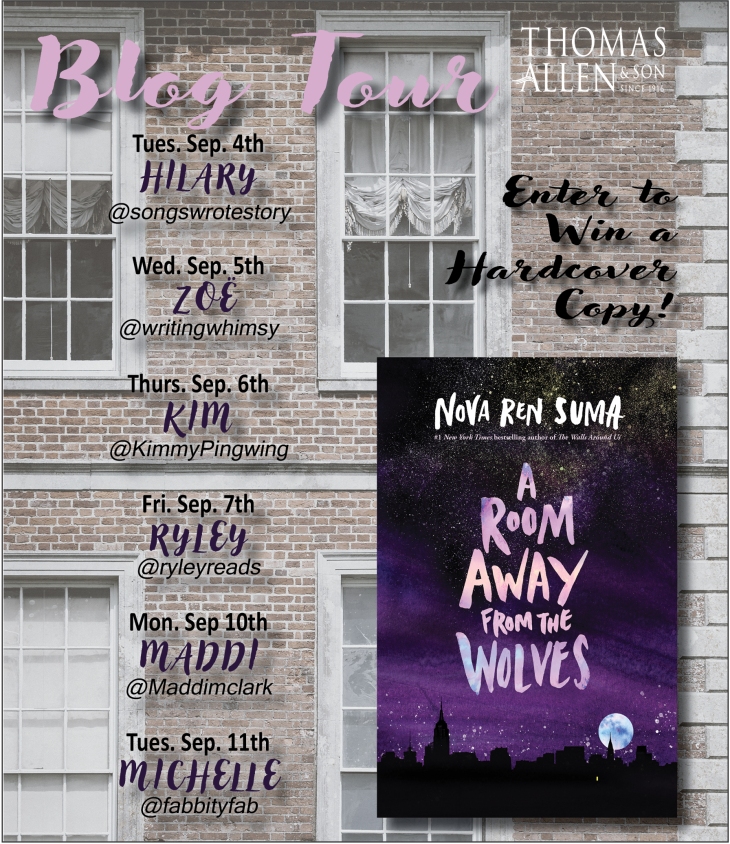 I received a copy of this title courtesy of Thomas Allen & Son in exchange for an honest review and for the purposes of this blog tour. All opinions and comments are my own. Giveaway fulfilled by Thomas Allen & Son.