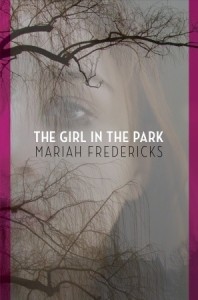 Review: The Girl in the Park by Mariah Fredericks

When Wendy Geller’s body is found in Central Park after the night of a rager, newspaper headlines scream,”Death in the Park: Party Girl Found Strangled.” But shy Rain, once Wendy’s best friend, knows there was more to Wendy than just “party girl.” As she struggles to separate the friend she knew from the tangle of gossip and headlines, Rain becomes determined to discover the truth about the murder. Written in a voice at once immediate, riveting, and utterly convincing, Mariah Frederick’s mystery brilliantly exposes the cracks in this exclusive New York City world and the teenagers that move within it.

The Girl in the Park is a tightly wound, haunting and uncomfortable mystery novel. Rain, the narrator of the novel, is a teen girl who lives on the periphery of action. She attends parties, but watches from the sidelines. She knows people and they confide in her, but she likes to be away from the center of activity. She is used to listening, not to talking. She used to be best friends with Wendy Geller, but they drifted apart as Wendy became more outlandish and outrageous.

When Rain hears about the disturbing death of her former friend- just hours after a major class party they both attended- she instantly thinks about who may have had cause to hurt Wendy. While Wendy may have been known as promiscuous, a boyfriend stealer, a crazy party girl, Rain takes offense when the local media and her schoolmates peg Wendy’s death as inevitable- something she had ‘coming’. When New York police begin to question the students, Rain gives police information about that evening- information that some of her classmates want left quiet. Rain begins a closer investigation of her former friend’s final night, searching clues she could have missed, all the while thinking back to the times she and Wendy spent together.

Fredericks has written a psychological and tense story that is written with great sensitivity. As the narrator, Rain is a fantastic- if not atypical- voice. She is a grieving friend, genuinely devastated by the loss of her friend, wanting to help the police as much as she can, but finding herself increasingly lost in a maze of clashing clues. I thought this was a very well-written mystery, full of unease and friction, with a conclusion that leaves room for discussion. If you like contemporary mysteries, thrillers, or psychological novels, or enjoy the YA work of authors such as Laurie Halse Anderson, Gayle Forman, Amy Efaw, Joyce Carol Oates, or Jay Asher then I would recommend this read.

Note: This review, written by me, originally appeared on my old site Fabbity Fab Book Reviews. Minor edits may have been made.