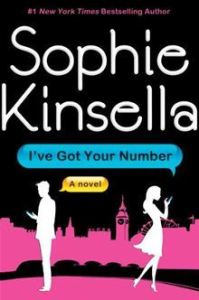 Review: I’ve Got Your Number by Sophie Kinsella

Poppy Wyatt has never felt luckier. She is about to marry her ideal man, Magnus Tavish, but in one afternoon her “happily ever after” begins to fall apart. Not only has she lost her engagement ring in a hotel fire drill, but in the panic that follows, her phone is stolen. As she paces shakily around the lobby, she spots an abandoned phone in a trash can. Finders keepers! Now she can leave a number for the hotel to contact her when they find her ring. Perfect!

Well, perfect except that the phone’s owner, businessman Sam Roxton, doesn’t agree. He wants his phone back and doesn’t appreciate Poppy reading his messages and wading into his personal life.

What ensues is a hilarious and unpredictable turn of events as Poppy and Sam increasingly upend each other’s lives through emails and text messages. As Poppy juggles wedding preparations, mysterious phone calls, and hiding her left hand from Magnus and his parents, she soon realizes that she is in for the biggest surprise of her life.

To me, a contemporary Kinsella novel is akin to a welcoming cup of hot chocolate. The author definitely has the right ingredients to make a cozy and comforting read: her female protagonists (imperfect and relatable); the male romantic interest(s) (smart and handsome); funny dialogue (laugh out loud), and amusing (sometimes wacky) plot turns.

For I’ve Got Your Number, our narrator is Poppy Wyatt. Poppy is about to marry scholarly Magnus- who she thinks is the most perfect man on the planet. Though, because it is a Kinsella novel, we can guess that Magnus is probably not the perfect match for her! She has been given a family heirloom from Magnus’ academically inclined family as her engagement ring: a gorgeous and antique emerald ring- basically irreplaceable. It wouldn’t be a Kinsella novel without a slightly anxious and accident-prone heroine, so, of course, Poppy loses sight of her engagement ring while her female friends are trying it on- and suddenly it’s missing and no one claims to know where it is.

Poppy is beside herself, freaking out yet trying to salvage the situation. Then, to top it all off, as she rushes outside for a phone call, her cell phone is stolen right out of her grasp! So Poppy does something desperate: she spots a cellphone tossed into a garbage can and claims it as her own…you know, temporarily. But then the phone rings, Poppy answers the call from a man named Sam, and before she knows it, things start unfolding in ways she never could have imagined.

If you’ve read and enjoyed Kinsella’s previous novels Can You Keep a Secret?, The Undomestic Goddess, or The Shopaholic series, then I recommend this read. Likewise, if you’re a fan of contemporary (and fun) fiction (or YA fiction), then I think you will enjoy this. I personally enjoyed this one much more than Twenties Girl and Remember Me? as I think it has more spark and a tighter plot.

Note: This review, written by me, originally appeared on Fabbity Fab Book Reviews. Minor edits may have been made.