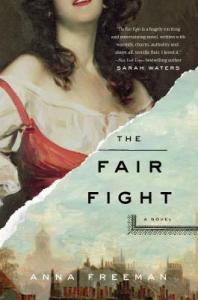 Moving from a filthy brothel to a fine manor house, from the world of street fighters to the world of champions, The Fair Fight is a vivid, propulsive historical novel announcing the arrival of a dynamic new talent.

Born in a brothel, Ruth doesn’t expect much for herself beyond abuse. While her sister’s beauty affords a certain degree of comfort, Ruth’s harsh looks set her on a path of drudgery. That is until she meets pugilist patron George Dryer and discovers her true calling—fighting bare knuckles in the prize rings of Bristol. Manor-born Charlotte has a different cross to bear. Scarred by smallpox, stifled by her social and romantic options, and trapped in twisted power games with her wastrel brother, she is desperate for an escape. After a disastrous, life-changing fight sidelines Ruth, the two women meet, and it alters the perspectives of both of them. When Charlotte presents Ruth with an extraordinary proposition, Ruth pushes dainty Charlotte to enter the ring herself and learn the power of her own strength.

A gripping, page-turning story about people struggling to transcend the circumstances into which they were born and fighting for their own places in society, The Fair Fight is a raucous, intoxicating tale of courage, reinvention, and fighting one’s way to the top.

You know when you’re so ensconced in a novel that when you wake to your real world you feel slightly discombobulated? So torn out of a time and place that you don’t feel quite there? That’s how I felt whenever I came up from air while reading The Fair Fight.

Do you need to be interested in or have knowledge of pugilism and its history to read this novel? No, and in fact, I actually don’t think that the book description (while detailed and accurate) does the novel justice. To me, pugilism is but one facet- to be sure it is a major one and the one that connects elements and characters together. The sport is also our major introduction to soon-to-be pugilist Ruth, her thirst and passion for bloodsport and the ring. However, the various characters, their backgrounds and their trajectories that follow are multifarious and go beyond the reaches of fighting- there are multiple elements involving love, motherhood, addiction, loyalty and sexuality- at turns devastating, inspiring and surprising. Always surprising. Perhaps the tag of selling this book as The Fight Club meets The Crimson Petal and the White’ is just that- a clever marketing ploy- to draw the eye and readers in on an exciting, niche topic.

I admit that it took a few chapters to get into the voice and slang of Ruth and to situate myself within the specific time and place period of eighteenth century Bristol. But when I did? It sailed. The Fair Fight is splendidly detailed, unrestrained in its energy and told through rotating first-person narratives. Now, I personally enjoy multiple narratives- especially if the characters are completely drawn out as they are here. Readers get the viewpoints and histories of not only Ruth Downs and Charlotte Sinclair, but also of George Bowden, handsome friend and fixation of the Sinclairs. Freeman crafts singular, assured voices with the narrations; she also intersects the histories, major and minor events as well as the personalities of the secondary characters so seamlessly that it reminds me a bit of J.K. Rowling’s dexterity. One minor quibble I have with the story is that, for a novel that draws and weaves and carefully kneads out detail, the last one hundred pages or so pack in so much that it is a bit flustering. Thrilling and unexpected at times, but almost a bit too much!

I think this novel will be one that I will long think about: all of the major the characters, their fates and their ends (particularly that of George and Charlotte’s brother Perry). The Fair Fight is one that breathes and bleeds and had my full attention and emotion. This is definitely one for fans of detailed and rich historical fiction. I was utterly engrossed in this novel- similarly as I was with Diane Setterfield’s The Thirteenth Tale– and give it a high recommendation.

Thank you to Goodreads First Reads and Penguin Canada.