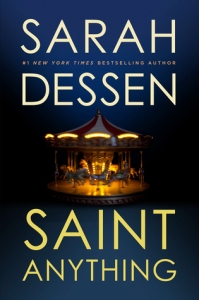 Peyton, Sydney’s charismatic older brother, has always been the star of the family, receiving the lion’s share of their parents’ attention and—lately—concern. When Peyton’s increasingly reckless behavior culminates in an accident, a drunk driving conviction, and a jail sentence, Sydney is cast adrift, searching for her place in the family and the world. When everyone else is so worried about Peyton, is she the only one concerned about the victim of the accident?

Enter the Chathams, a warm, chaotic family who run a pizza parlor, play bluegrass on weekends, and pitch in to care for their mother, who has multiple sclerosis. Here Sydney experiences unquestioning acceptance. And here she meets Mac, gentle, watchful, and protective, who makes Sydney feel seen, really seen, for the first time.

Returning to the much-loved and much-used stomping grounds of the fictional town of Lakeview, Dessen has crafted another contemporary/romantic YA. I have commented before that I wish Dessen would go beyond her usual safe zones- in terms of place, setting, tone, first-person narrative voice, etc.- and I still feel the same way after reading this! While I did enjoy Saint Anything as a whole much more than Whatever Happened to Goodbye and The Moon and More, in the end it is decently done contemporary YA but ultimately (and unfortunately) slightly forgettable.

Through chunks of the novel I had a feeling of been-there, read-that. Even with a kind of ‘everyteen’ female narrator who read as very relatable, a few wonderfully crafted secondary characters, a gentle romance and compelling main arc, I did not end up wowed. Does Dessen continue to write contemporary YA that readers can relate to? Absolutely. Is her writing easy to read, easy to devour, and filled with characters and romance that readers appreciate? Absolutely. This latest novel, though, seemed to be missing a certain spark: that kind of freshness and captivating nature that earlier works such as Keeping the Moon, Just Listen or The Truth About Forever have in spades.

I think part of the problem is that while Saint Anything has some truly beautiful and poignant moments, they get lost in the shuffle of numerous storylines, extraneous characters, and unnecessary dramatics in the last third of the novel. For example, I really enjoyed the first half of the novel: I loved reading the development of Sydney’s friendship with Layla Chatham and her introduction to the Chatham family. I was also very interested in how Sydney and her mother were separately dealing with Peyton’s prison sentence- and how this was affecting their relationship. Somewhere after the halfway mark though, angst begins and remains, formulaic plot curves are thrown, and one odious character remains for far, far too long.

Overall, Saint Anything is a highly readable and decently done contemporary/romantic YA with some touching moments, but it doesn’t bring anything new to the table. Saint Anything will likely be sought after by longtime fans of Dessen’s work, and readers who enjoy YA writers such as Sarah Ockler, Huntley Fitzpatrick, Jenny Han, Robin Benway and Leila Sales.