This week is all about picture books- five titles, to be exact! The following picture books listed below are ones that: have received terrific praise from review journals; are the work of authors and illustrators I adore; titles I’m utterly curious about; or a combination of any or all of the above! 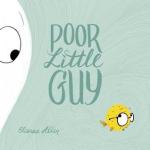 What do you do when you’re so tiny that the bigger ocean creatures think you might even taste adorable?

An itsy-bitsy, glasses-wearing fish is minding his own business when a playful (and hungry) octopus snatches him right up. Luckily, this poor little guy is not quite as innocent as he seems…and he has a BIG surprise up his sleeve!

Told with wit, a wink, and a delightfully dark sense of humor, Poor Little Guy celebrates the very smallest…and all of their giant victories. Hand this cute but mighty book to fans of Bob Shea and Dan Krall.

It Came in the Mail by Ben Clanton
Publication: June 21, 2016 by Simon & Schuster Books for Young Readers

From the author-illustrator of Something Extraordinary comes a tale filled with dragons, pickles, friendship, and lots of mail—perfect for fans of Mo Williams and Bob Shea.

Liam really wants some mail, so he writes a letter to his mailbox asking for something in return. His mailbox delivers, sending Liam more than he could have hoped for…and how! But as the mail starts to pile up, Liam realizes that the best packages and parcels are even better when shared with friends.

It’s the first day of school at Frederick Douglass Elementary and everyone’s just a little bit nervous, especially the school itself. What will the children do once they come? Will they like the school? Will they be nice to him?

The school has a rough start, but as the day goes on, he soon recovers when he sees that he’s not the only one going through first-day jitters.

The Uncorker of Ocean Bottles, who lives alone atop a hill, has a job of the utmost importance. It is his task to open any bottles found at sea and make sure that the messages are delivered. He loves his job, though he has always wished that, someday, one of the letters would be addressed to him. One day he opens a party invitation—but there’s no name attached. As he devotes himself to the mystery of the intended recipient, he ends up finding something even more special: the possibility of new friends.

A Child of Books by Oliver Jeffers and Sam Winston
Expected publication: September 6, 2016 by Candlewick Press

A little girl sails her raft across a sea of words, arriving at the house of a small boy and calling him away on an adventure. Through forests of fairy tales and across mountains of make-believe, the two travel together on a fantastical journey that unlocks the boy’s imagination. Now a lifetime of magic and adventure lies ahead of him . . . but who will be next? Combining elegant images by Oliver Jeffers and Sam Winston’s typographical landscapes shaped from excerpts of children’s classics and lullabies, A Child of Books is a stunning prose poem on the rewards of reading and sharing stories—an immersive and unforgettable reading experience that readers will want to pass on to others.