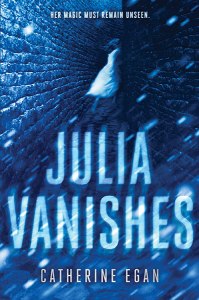 Julia has the unusual ability to be…unseen. Not invisible, exactly. Just beyond most people’s senses.

It’s a dangerous trait in a city that has banned all forms of magic and drowns witches in public Cleansings. But it’s a useful trait for a thief and a spy. And Julia has learned—crime pays.

Her latest job is paying very well indeed. Julia is posing as a housemaid in the grand house of Mrs. Och, where an odd assortment of characters live and work: A disgraced professor who keeps forbidden books and sends her to fetch parcels containing bullets, spiders, and poison. An aristocratic houseguest who is locked in the basement each night. And a mysterious young woman with an infant son who is clearly hiding—though from what or whom?

Worse, Julia has a creeping suspicion that there’s a connection between these people and the killer leaving a trail of bodies across the frozen city.

The more she learns, the more she wants to be done with this unnatural job. To go back to the safety of her friends and fellow thieves. But Julia is entangled in a struggle between forces more powerful than she’d ever imagined. Escape will come at a terrible price.

And even a girl who can vanish can’t walk away from her own worst deeds.

Sometimes it is wonderful to go into a book knowing only a little about what is to come. When I first read the description of Julia Vanishes, my interest was immediately piqued as I had not read, in recent memory, a young adult novel on the fantastical-historical spectrum. And readers, how delighted am I to say that Canadian author Catherine Egan absolutely surprises with the epic and engrossing Julia Vanishes.

With a strong mixture of skillful world-building, a compelling unique main character, a  well-drawn cast of main and supporting characters, and a wonderfully rich and darkly evocative atmosphere, Julia Vanishes is indeed a fascinating read. In chapters alternating between the first-person narrative of sixteen year-old thief Julia, and an omnipresent third-person view, readers are taken deep into an alternate world where witches are drowned, and magic is an evil word. When we meet Julia, she has been hired to pose as a housemaid to investigate the possibly illegal (magical, witch-related) activities happening in a wealthy household. The more Julia stealthily- and dangerously- uncovers about her place of hire and the people living there, the more she becomes inextricably linked to a mammoth, twisted magical machinations that date back centuries. Through her hired work, Julia also slowly begins to uncover more about her own deceased mother’s powers, her unhealthy fixation with watching witches drown in public Cleansings, and just what her strange ability to be ‘unseen’ might actually be linked to.

Julia Vanishes is extremely rich- rich in atmosphere, tone, setting, plot development, and character revelations. It is a testament to Egan’s impressive ability to write so fluidly, so capably, that Julia’s story- and the stories within the story- does not feel overwhelming or muddled. The last quarter of the novel in particular manages to pack another momentous journey with our main characters, filled with even more surprises and reveals. I must say while I had initially been dubious about the sheer volume of information uncloaked regarding Julia and her mother’s past, as well as the grand battle/fight scenes, I have come to appreciate how well Egan has prepared the reader (and excited interest!) for a follow-up. Leaving matters on quite a cliffhanger- but in an understandable rather than frustrating manner- there is much to look forward to and anticipate when we next meet with Julia. Julia Vanishes looks to be the first in a planned trilogy, and I absolutely intend to follow along with this wonderful story.

Overall, Julia Vanishes captivates from start to finish. The novel is an accomplished, sophisticated and surprising entry in the fantasy/witches sub-genre in young adult literature. Readers who enjoy the work of authors such as Jessica Spotswood, Sharon Cameron, Kevin Sands, Leigh Bardugo, or Jennifer McGowan, or any readers looking for a strong read blending historical fantasy and paranormalcy, might do very well to check out Julia Vanishes.

I received a copy of this title courtesy of Penguin Random House Canada via Goodreads First Reads in exchange for an honest review. All opinions and comments are my own.