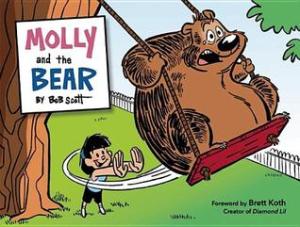 Review: Molly and the Bear by Bob Scott
Source: Hardcopy courtesy of the author and publisher. Thank you!
Publication: March 8, 2016 by Cameron + Company
Book Description:

It can be tough on a family when someone new has moved in, especially if it’s a 900-pound scaredy-bear so terrified of wilderness life that he’s fled to the burbs. Fortunately Bear was found by Molly, a fearlessly optimistic 11-year-old can-doer who has taken him firmly in hand, devoted to seeing her hirsute BFF cope with modern life. Molly’s Mom is happy with the new sibling — Bear’s an excellent conversationalist and loves her homemade cookies. But Dad is having a harder time, his role as center of the universe now shared with an ursine behemoth who, unfortunately, adores him.

One thought that kept running through my mind as I read Bob Scott’s Molly and the Bear was, I wish I had known about this comic strip earlier. Having grown up reading (and re-reading) Peanuts, Calvin and Hobbes, Garfield, FoxTrot, Herman, Hagar the Horrible (and many more favourites!), comic strips have been a major part of my life since I was a kid. Molly and the Bear would have easily slotted into that mix back then- as it also fits into my reading today. Artist, animator, illustrator Bob Scott, who has worked on projects including Pixar’s The Incredibles, brings a wonderful level of madcap charm and endearing nostalgia with his web comic Molly and the Bear.

Fleeing from the fearsome dangers of the wilderness, Bear- similarly to Goldilocks- sneaks into a house. There he finds a best friend in Molly, an eleven-year-old girl who is thoughtful and brave, and most of all, loves him through and through. The contrast between Bear, a high-strung nine-hundred pound creature, with that of a petite, enthusiastic young girl is ripe for comedy from the get-go, but Scott makes it even richer and sweeter (and funnier) as he draws out and grows their genuine friendship and affection for each other. Bear, though arguably happier in civilization than the wild, comes up against constant obstacles in his new residence. Namely, an obstacle known as Molly’s father. Reminding me a little of a Hanna-Barbera character in nature and appearance, Molly’s father is a bit of a curmudgeon- an ornery and proud man of the house (…like Fred Flinstone…) who is often at odds with Molly and his wife about the fact that he would much prefer Bear to go back to the wilderness. Bear and Dad’s relationship is one feature of the strip that makes for great comedy: while Molly’s dad typically blows a gasket at Bear’s minor accidents and major mistakes, it is a lot of fun to see their ups and downs and how Dad’s fondness of Bear grows begrudgingly.

I find Molly and the Bear to be at its funniest, most surprising and most genuine when it does not insert more contemporary pop culture and/or modern references the mix. To be fair, this doesn’t occur too often- but as an example, there are moments in the strip when characters send text messages, or when Slash from Guns ‘N Roses and Angelina Jolie are mentioned. For various reasons, Molly and the Bear has the fantastically evocative and joyful feel of a more classic, if not retro comic strip that doesn’t need to focus on trend, which is why some of the more current references feel slightly discordant. I feel that Scott’s writing and thus the gags work at their strongest and sharpest when the focus is on the main characters and their interplay rather than when its trying to place itself in contemporary time.

In all, I had a whale of a time reading through the collection of Molly and the Bear strips. While easily found online as a web comic, I would like to note that the hardcover edition is quite beautiful: the larger page layouts are conducive to easy reading, and it includes an introduction, a welcome to the main characters- in full colour-, as well as a special ‘Behind the Ink’ section. Comic strip book aficionados might particularly appreciate those features! Any readers who have read and/or enjoy comic strips such as Mother Goose & Grimm, Dennis the Menace, Red and Rover, or any of the comics mentioned above, might especially take to the classic comedy and heart in Molly and the Bear.

I received a copy of this title courtesy of Bob Scott and Cameron + Company in exchange for an honest review. All opinions and comments are my own.