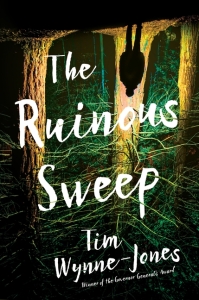 On the night Donovan Turner is thrown out of a car on a highway in the middle of nowhere, he can barely remember his own name, let alone the past twenty-four hours. Where is he? Where is his girlfriend, Bee? In an attempt to flag down the next passing car, he startles the driver, causing a fatal accident. With sirens in the distance and the lingering feeling that he’s running from something — or someone — Donovan grabs the dead driver’s briefcase and flees. Meanwhile, Bee is fighting for Dono’s life every bit as much as he is. But when the police show up and hint that he is the prime suspect in a murder, Bee is determined to put together the pieces of what happened and clear his name. With echoes of Dante’s Divine Comedy, this harrowing journey through hell and back is a page-turning tale of guilt, retribution, love, and redemption.

A rainy night. An empty highway. And no memory. From award-winning author Tim Wynne-Jones comes a riveting murder mystery that will keep readers enthralled until the last page.

Donovan closed his eyes. He couldn’t take much more of this. He was so tired. Too tired to keep his guard up. Words were seeping from him in a slow drip. What was he doing? How did he get here? He searched the empty highway ahead. He was running from something. That had to be it. He glanced back over his shoulder and saw only darkness out the rear window, and below it the darkness of something under wraps, something still breathing but smelling as if it had stopped.

Twice the winner of the Governor General’s Literary Award, critically-acclaimed Canadian author Tim Wynne-Jones returns with The Ruinous Sweep, a labyrinthine young adult mystery. A thrilling read, both sinister and heartbreaking, The Ruinous Sweep lightly draws from Dante’s Divine Comedy.  Wynne-Jones’s novel tells the story of seventeen year old Donovan Turner’s harrowing journey through what appears to be an otherworldly plane as his brilliant girlfriend Beatrice seeks to discover the truth behind his accident and the suspicions that Donovan may have committed murder before he was struck by a car and left for dead.

The first section of The Ruinous Sweep, The Space Casket, is told in alternating third-person narratives between main protagonists Donovan (aka Turn and Dono) and Beatrice (aka Bee). In The Space Casket, readers learn that Turn is in critical condition in the hospital, barely alive after being hit by a car. As his girlfriend Bee sits beside him in the hospital bed, despairing, horrified and angry, she decides to jot down every word or noise Turn makes in the hopes that it may help her figure out what happened. When the narrative shifts back to Donovan’s, readers are taken on an arguably hallucinogenic-like odyssey, equal parts terrifying, isolating, and bizarre. Is Donovan dreaming these strange journeys, in which his manipulative, unkind father and past acquaintances appear…in which gruesome scenes and also happier scenes from his childhood emerge? Has Donovan been tasked to fight his way through some kind of hellish limbo in order to get back to Bee and his mom? Readers might understandably get slightly frustrated with Donovan’s nightmare-like journey: Bee’s narrative is the more immediately viable and present (more directly focused on solving the mystery), and Donovan’s narrative is indeed complicated and sometimes puzzling. However- do go along with Donovan’s journey through The Space Casket: not only is it meticulously written, carefully plotted and planned, but also all comes together in part two, The Bowhunter. In part two, the focus shifts to Beatrice- who grows and truly maintains herself as a hero (faults, mistakes, exceptional moments and all). Through chapters in The Bowhunter, readers are along an unstoppable ride- tense and genuinely frightening- as Bee begins a deep dive into Donovan’s uttered words at the hospital. Looking back into Donovan’s childhood and Donovan’s father’s connections, Bee starts shifting puzzle pieces into play, trying to figure out who might have had cause to harm Turn. While the police assigned to Turn’s case are mostly reticent and on Bee to stay out of their investigation, Bee carries on, leading to an incredibly charged end, both satisfying and bittersweet- one that ties all of novel’s loose strings together.

Overall, a thoroughly compelling, intricately woven, strongly written young adult novel- deeply unusual and unsettling from beginning to end …(I can see The Ruinous Sweep in contention for Canadian lit awards come the season).  Be sure to give yourself the patience and space to let yourself sink first into Donovan’s story and then into Beatrice’s captivating turn. Readers who are fans of authors such as A.S. King, Laurie Halse Anderson, Courtney Summers or Brenna Yovanoff might especially find themselves thoroughly entrenched in the macabre of The Ruinous Sweep.

I received a copy of this title courtesy of Candlewick Press in exchange for an honest review. All opinions and comments are my own.