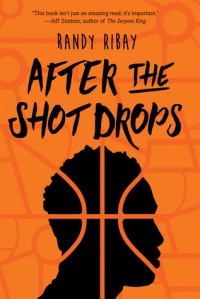 Bunny and Nasir have been best friends forever, but when Bunny accepts an athletic scholarship across town, Nasir feels betrayed. While Bunny tries to fit in with his new, privileged peers, Nasir spends more time with his cousin, Wallace, who is being evicted. Nasir can’t help but wonder why the neighborhood is falling over itself to help Bunny when Wallace is in trouble.

When Wallace makes a bet against Bunny, Nasir is faced with an impossible decision—maybe a dangerous one. Told from alternating perspectives, After the Shot Drops is a heart-pounding story about the responsibilities of great talent and the importance of compassion.

Randy Ribay‘s stand-out contemporary YA novel After the Shot Drops tells the story of two teens as they make their way through painful turns in the aftermath of a friendship breakdown.

Told in alternating first-person narratives, readers follow rising high school basketball star Bunny Thompson and his now-estranged best friend Nasir Blake. When we first meet our two main protagonists, it is at the funeral of a neighborhood kid. Bunny, now a student and star player at St. Sebastian’s- a private school in the suburbs- divulges his awkwardness and complicated feelings about his old school, Whitman High, and the fact that Nasir didn’t support his desire to make something better of himself at St. Sebastian’s. Bunny wants to make things better for his family, to make the most of a once-in-a-lifetime opportunity, but Nasir doesn’t see it like that. As the narrative shifts back to Nasir, we see how deeply he and his cousin Wallace took Bunny’s leaving their old school to go somewhere affluent like St. Sebastian’s- like a betrayal and middle finger to their community. In the back and forth between Bunny’s meteoric rise as the young player in the state to watch and his attempts to reach out to Nasir, Nasir finds himself entrenched in Wallace’s problems while his own family is struggling financially. Nasir finds out that there is a possibility of Wallace and his grandma becoming homeless and begs his parents to help Wallace, only to be rebuffed. As Wallace spirals down a track of gambling, his dislike for Bunny bleeds into hatred which eventually leads to a showdown between the three young men. With multiple angles and twists to both Bunny’s and Nasir’s storylines, Ribay keeps the narrative between the two main characters clean and tight; the narrative is fast-moving, electrifying, and towards the end, heart-stopping. Also of note: while arguably a main focus of the novel is on the possible repair of Bunny and Nasir’s broken friendship and Bunny’s basketball playing, there is a slight shift in Nasir’s narrative focus; one that ends up being as incredibly profound as it is heartbreaking.

Overall, a tremendous read that’s already received numerous starred reviews. After the Shot Drops is so strongly and smoothly written, compelling and gut-wrenching all at once, broaching talk about race, privilege, the capacity for empathy, and of who gets afforded opportunity. Any readers who enjoy contemporary and/or realistic YA, sports-themed reads, or the work of authors such as Jason Reynolds, Kwame Alexander, Laurie Halse Anderson, Renée Watson and Kelly Loy Gilbert might especially appreciate this terrific, nuanced novel from Randy Ribay.