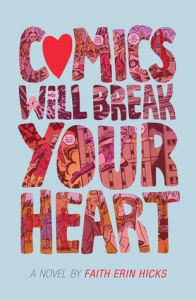 A sweet, funny contemporary teen romance for the inner geek in all of us from graphic novelist Faith Erin Hicks.

Miriam’s family should be rich. After all, her grandfather was the co-creator of smash-hit comics series The TomorrowMen. But he sold his rights to the series to his co-creator in the 1960s for practically nothing, and now that’s what Miriam has: practically nothing. And practically nothing to look forward to either-how can she afford college when her family can barely keep a roof above their heads? As if she didn’t have enough to worry about, Miriam’s life gets much more complicated when a cute boy shows up in town . . . and turns out to be the grandson of the man who defrauded Miriam’s grandfather, and heir to the TomorrowMen fortune.

In her endearing debut novel, cartoonist Faith Erin Hicks pens a sensitive and funny Romeo and Juliet tale about modern romance, geek royalty, and what it takes to heal the long-festering scars of the past (Spoiler Alert: love).

You may recognize the name of Canadian author Faith Erin Hicks as the graphic novelist behind popular titles such as The Nameless City series, Friends With Boys, or The Adventures of Superhero Girl. With Comics Will Break Your Heart, Hicks dives into the world of contemporary young adult with a beautifully written, poignant story.

Told in alternating third person points of view- from Miriam ‘Mir’ Kendrick and Weldon Warrick- Hicks’ novel debut is the story about two teens coming together in the face of their respective families’ profoundly bitter history. After a spell of bad behavior and bad choices, Weldon Warrick is relegated to spend the summer with his aunt and uncle in the tiny East Coast town of Sandford, Nova Scotia. While exploring the rundown Emporium of Wonders comics shop in Sandford’s small downtown, Weldon meets Miriam Kendrick, working at the counter. It is Miriam who first puts together that Weldon is a Warrick from that family. For Mir and her family, the Warrick family has been and continues to be a source of painful memories, anger and soured feelings. Mir’s grandfather, Micah Kendrick, was the original artist behind the exceedingly popular comic strip the TomorrowMen, which was started in the 1960s with friend Joseph Warrick.  A horrible and lengthy legal battle followed the families for years as Micah unknowingly sold rights at a bargain and Joseph Warrick essentially took TomorrowMen from the Kendrick family and began a separate comics empire that blossomed into a hugely successful conglomerate. Mir’s hatred of the Warrick family rests mostly on the unfairness of it all: Mir sees the immense wealth of present-day Warrick Studios- an empire she sees as stolen from her family- and compares it with her own family’s relative lower-income stature and feels the burn of it all. Mir thinks about how much she works, how desperately she saves her money and constantly worries about how she might be able to afford university, and finds it desperately ironic, strange, and possibly laughable that she finds herself drawn to the grandson of Joseph Warrick…(similarly in how Weldon is captivated and drawn in by Miriam and her family).

Hicks tells such an intriguing and thoughtfully layered story here: of arguments behind ‘owning’ art, of profiting off of art, and the trail of spite and burnout that theft of art- whether determined as legal or not- causes; of a teen’s worry about their life beyond high school and their small town, and of the friends who don’t want to leave; and of desire for an unfamiliar person and for an unknown life that are terrifying, dazzling, and assumed to be out-of-reach. While a portion of story energy is spent on detailing the Kendrick-Warrick history, it is a fascinating component of Comics Will Break Your Heart, and necessary to better understand Miriam, and the developments that occur in Mir and Weldon’s relationship. From Sandford all the way to San Diego Comic Con (which does indeed make an appearance later in the story!), Weldon and Mir’s story is keenly thoughtful, quiet yet incredible all at once, with the world of comics- and the richly imagined, fictitious TomorrowMen – as a backdrop to their story.

Overall, a thoughtful, engrossing, and felt contemporary young adult title. The relationship between Mir and Weldon is especially achingly beautifully, though the entire story is very well-developed and wonderfully unexpected. For readers who appreciate their YA on the quieter, unhurried, but emotionally powerful side- think along the lines of Jennifer E. Smith, Susin Nielsen, Lisa Moore, or Nina LaCour- Comics Will Break Your Heart is a fantastic pick.