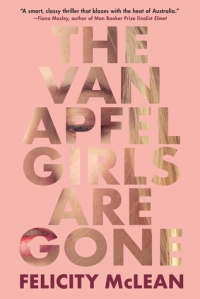 Tikka Malloy was eleven and one-sixth years old during the long, hot, Australian summer of 1992. The TV news in the background chattered with debate about the exoneration of Lindy (“dingo took my baby”) Chamberlain. That summer was when the Van Apfel sisters–Ruth, Hannah, and the beautiful Cordelia–mysteriously disappeared. Did they just run far away from their harsh, evangelical parents, or were they taken? While the search for the girls united the small community, the mystery of their disappearance was never solved, and Tikka and her older sister, Laura, have been haunted ever since by the loss of their friends and playmates.

Now, years later, Tikka has returned home to try to make sense of that strange moment in time.

Felicity McLean‘s debut novel, The Van Apfel Girls Are Gone, has received numerous favourable reviews from publications such as Library Journal, Entertainment Weekly, and Booklist. A tantalizing and unsettling story that centers around the disappearance of three young sisters, McLean’s fiction debut blends elements of coming-of-age and psychological suspense to tell a strange and compelling story.

Growing up in a relatively small Australian suburb, Tikka and her older sister Laura are friends with the talked-about Van Apfel sisters- Hannah, Cordelia (Cordie), and Ruth. Friends by proximity and babysitting duties, Tikka happens to be grudgingly closest to Ruth, the youngest Van Apfel, but is most transfixed by the defiant, unnaturally stunning middle sister Cordie. During the scorching summer of 1992 when Tikka is just eleven years old, as a headline-making case continues to make waves, Tikka and Laura become privy to secret news that Hannah and Cordie are planning to escape. To leave. And one night during a school concert, before Tikka ever thinks to ask ‘why?’, all three girls just…vanish.

Through Tikka’s flashbacks and memories, readers are offered a look into the brutality the Van Apfel sisters face under their domineering, ecclesiastical father. Troubling- shocking- whispers regarding Mr. Van Apfel, Cordie’s deemed-to-be provocative behavior, a new teacher’s possible eye on Cordie, and a probable suicide attempt run out of control, with Tikka and Laura caught in the midst. As the narrative weaves to present-day Tikka, now an adult and visiting her family in Australia, haunting questions about what happened to the Van Apfel girls continue to weigh heavily. Forever disturbed and changed by the loss of three friends and the unsolved nature of their disappearance, Tikka’s narrative is wholly absorbing, brooding, and complicated. As Tikka prods her memories, continues to dream that the otherworldly Cordie escaped to a better life, and feels guilt over actions not taken, readers may find themselves desperately itching for some kind of finality. For answers. Surely, there has to be some kind of closure…right?

Overall, The Van Apfel Girls Are Gone is a simmering, devastating meditation on painful what-ifs and if-onlys. Readers who enjoy pensive, intensely atmospheric, melancholy mysteries; ones filled with flashbacks, time jumps and ruminations, The Van Apfel Girls Are Gone might be one to try. If you have read and enjoyed the work of authors such as Nova Ren Suma, Brenna Yovanoff, Claire Fuller, Tim Wynne-Jones,  or Tim Johnston, Felicity McLean’s eerie and fascinating debut is one to reach for.

I received a copy of this title courtesy of Thomas Allen & Son in exchange for an honest review. All opinions and comments are my own.