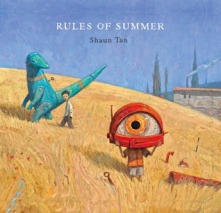 Rules of Summer by Shaun Tan

RULES OF SUMMER, is a deceptively simple story about two boys, one older and one younger, and the kind of ‘rules’ that might govern any relationship between close friends or siblings. Rules that are often so strange or arbitrary, they seem impossible to understand from the outside. Yet through each exquisite illustration of this nearly wordless narrative, we can enjoy wandering around an emotional landscape that is oddly familiar to us all.

Shaun Tan draws upon his own personal experiences with a surreal snapshot of fishing adventures with his older brother, leaving a sock on the clothes line, and buildings inspired by Brunswick and greater Melbourne.

As you venture deep into the story, these poetic images become darker, more mysterious and unsettling, drawing towards a redemptive ending that affirms the depth of true friendship, a bond that is equally wonderful and inexplicable.

In his ‘Hilarious’ stand up routine, comedian Louis C.K. does a segment on how the word ‘hilarious’ (among other descriptive adjectives) are much overused. Things are being called hilarious or amazing, or incredible which frankly might not be. Those chicken nuggets? That “story” about seeing an old friend from high school? Maybe let’s not use HILARIOUS or AMAZING to describe those things.

Where am I going with this analogy?

Back to Shaun Tan. For many authors and illustrators I have been perhaps overly profuse in my adoration, in my praise…and then when I read someone Shaun Tan, I wish I had held back some of that previous enthusiasm so I could make it significant/meaningful for someone like Tan.

Illustrations? Each frame unto itself an unsettling, gorgeous and haunting pieces of artwork.

I don’t know what else to say, really, otherwise I will be veering off into gushing territory. If you haven’t read any of Tan’s works, I highly recommend reading- Lost and Found is a particular favourite of mine. I will end off here with Shaun Tan himself, talking about a terrific scene in Rules of Summer.