From Lauren Child‘s Charlie and Lola dreaming of and picking out a rather unexpected dog, to Madeleine L’Engle‘s dog Touché telling her story- brought to life by artist Christine Davenier– of having to come to terms with a new, unusual sort of dog, canines are on the roster today! 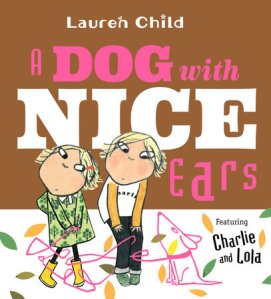 In Lauren Child’s A Dog with Nice Ears (Featuring Charlie and Lola), the effervescent and irreverent brother and sister duo talk about their plans for getting a pet…more specifically, what kind of perfect dog they would like to get! Now, Charlie and Lola’s parents have told them “Absolutely no dogs!”, but little Lola has a plan. Though their dad has promised to “take Lola to the pet shop one Saturday” so that “she can choose whichever rabbit she wants”, Lola will try and bring a dog home instead. With a promise made to Charlie that she will choose a dog, not a rabbit, Lola and Charlie go back and forth about dog names, what kind of tail they’d like their dog to have, as well as the imperative of their dog having nice ears (for wearing its reading glasses!). Their friend Marv comments that with all their various wants and wishes for a dog, Charlie and Lola are definitely going to have a weird dog. The story leads to an adorable, sweetly funny and perfectly on-brand off-kilter ending when Lola brings home a most peculiar, wiggly-nosed, large-eared, puffy-tailed, hopping sort of dog. I have long loved Lauren Child’s writing and artistry: my first foray into her work was the fabulous Clarice Bean picture books, later the Clarice Bean novels, and I’ve been happily reading Child’s work since! A Dog with Nice Ears is a solidly fun and completely charming addition to the popular Charlie and Lola series.

The Other Dog, written by A Wrinkle in Time Newbery Medal winner Madeleine L’Engle and illustrated by prolific artist Christine Davenier (illustrator of Miss Lina’s Ballerinas, The Very Fairy Princess series), is a story narrated by L’Engle’s poodle Touché. When readers meet the great, refined, proud poodle, Touché L’Engle-Franklin lets us know the she, in fact, wrote this story with the help of an “inferior canine” named Jo. As we delve into the story, we find out that Touché’s mistress disappeared for several days and dared to came back home with another dog named Jo (readers see L’Engle cuddling a little baby!). For Touché, this rates as rather silly: dogs are expensive and surely “one dog is enough for any family”! Touché is talented, has acted on stage, is beautiful, loves sitting on laps, has a tail “like a little chrysanthemum”, and knows to never go to the bathroom inside the house, so “why another dog?”. However, when Jo-dog (as Touché refers to her) starts to grow and explore her world bit by bit, Touché finds that, actually, not all is lost. Yes, Jo-dog requires a lot of looking after, and will never grow a chrysanthemum tail, but Touché enjoys that Jo-dog is a great listener and seems to appreciate her company, so much so that Touché has to admit: “in spite of everything…I am getting very fond of our other dog”. In all, dog lovers of any and all ages might just fall in love with Touché’s terrific story. Touché’s narrative is observant, dry and witty all at once, while Davenier’s signature loose yet refined pencil and watercolour style so wonderfully captures Touché’s learned manner, the story’s overall elegance, and the gently sentimental feel of the story. Be sure to read the lovely forward included in this edition of The Other Dog, written by Charlotte Jones Voiklis, L’Engle’s granddaughter and daughter of Jo (Josephine) of the story. It was very surprising to learn that this children’s title was not accepted for publication until fifty years after L’Engle first wrote it! There is also a fantastically detailed Author’s Note (including sketches!) from Madeleine L’Engle detailing how Touché came into her life, Touché’s life with their family, and how much L’Engle and family clearly loved and cared for their furry friends.

I received a copy of A Dog with Nice Ears courtesy of Penguin Random House Canada/Candlewick Press in exchange for an honest review. I received a copy of The Other Dog courtesy of Raincoast Books in exchange for an honest review. All opinions and comments regarding the titles are my own. Thank you to the publishers! Both titles have been published and are currently available.