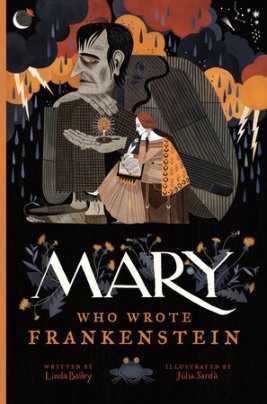 “Here is Mary. She’s a dreamer. The kind of girl who wanders alone, who stares at clouds, who imagines things that never were.”

Canadian author Linda Bailey teams up with acclaimed illustrator Júlia Sardà (The Liszts, with Kyo Maclear) to bring readers the stunning picture book biography Mary Who Wrote Frankenstein. Mary Shelley- daughter of women’s rights activist and writer Mary Wollstonecraft and philosopher William Godwin, wife to Percy Bysshe Shelley– is well-known and lauded for her groundbreaking novel Frankenstein; or, The Modern Prometheus- which is considered, as Bailey writes, “the first modern novel of science”. This pictorial biography take a quick dip into Mary’s childhood: the impacts of her mother’s death, her father’s remarrying, and how hearing Samuel Taylor Coleridge’s in-person recitation of The Rime of the Ancient Mariner forever affected Mary. The book then takes a deeper dive and focuses on the possible inspirations and factors that led to the masterpiece Frankenstein being written when Mary was eighteen. Attention is given to one particular trip that Mary, her cousin Claire, Percy Shelley, poet Lord Byron and doctor John Polidori go on together to Switzerland. One summer evening when “mysterious storms” happen, the five are “huddled beside the fire” and readers learn that Lord Byron suggests a ghost story contest, and though Mary is stalled at the beginning, she soon imagines, “in that strange, lost time, between wake and sleep…a hideous monster, made out of dead body parts…”. And so begins Mary’s writing of a ghost story that would become Frankenstein. While highlighting pivotal moments of Mary’s life, Bailey also gives emphasis throughout the book to storytelling: of the power and wonder in daydreaming and imagining. Moreover, while there were those during and after Mary’s lifetime who question(ed) “how could a girl like [Mary] come up with such a story?”, us readers (and Bailey emphasizes this) all know how a young girl like Mary- taught to read by tracing the letters of her mother’s gravestone, saturated with daydreams and a deep imagination- could write something as momentous as Frankenstein. And did. Also of note: Sardà’s illustrations are, quite simply, exquisite- lush, gothic, surreal, delicate and/or ornate as appropriate; what a brilliant, meant-to-be pairing with Bailey’s text. Be sure to read Linda Bailey’s beautifully written, detailed yet incisive Author’s Note; there is also a Sources list for those interested in further research and exploration. 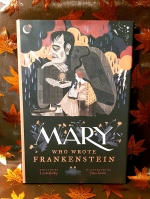 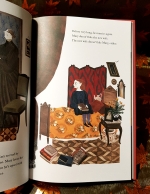 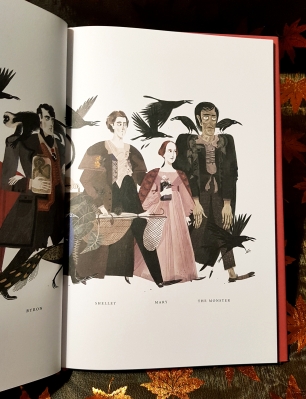 “Have you ever woken up late at night to stairs creaking? Ever seen a light flicker or maybe heard a door slam? Well, those things aren’t happening by themselves! Us Ghosts have a strict schedule for chores.”

The Canadian author and illustrator behind Where Oliver Fits and Explorers of the Wild, Cale Atkinson turns his delightful and expressive storytelling and art to ghosts. Specifically, a rosy-cheeked Ghost (capital G) named Sir Simon Spookington. In Sir Simon: Super Scarer, readers are taken along for quite a ride with Simon as he gets transferred to his very first haunted house. Simon tells readers that he’s haunted everything from pizza and potatoes to bears (difficult) and bus stops, but that haunted houses are rather tricky and tiring because of the “strict schedule for chores”. Simon has to take care of attic stomping and toilet flushing, among numerous other tasks, though he has personal pleasures (like writing and learning French) that he’d rather be spending his time on. When he discovers that his haunted house is occupied by a child and grandparent rather than two older people, he decides, rather selfishly, to make the most of having young, adorable, eager, ghost-believing, ghost-loving Chester at his beck and call. Not to give too much of the story away here, but Simon learns that Chester is perhaps as effective at Ghosting as he is at assisting with human chores…but what happens if they just have fun…together? Well, let’s leave the ending for when you read the story! One of the the most splendid, sweet and sincere ghost-centered stories, Sir Simon: Super Scarer is such a delight. Not just a story for Halloween, Atkinson’s wonderfully illustrated tale (the details!) is one that, due to its thoughtful and funny storytelling, can absolutely be enjoyed any time of the year. Readers who enjoy stories like Rebecca Green’s How to Make Friends with a Ghost, Patrick McDonnell’s The Monsters’ Monster or Mac Barnett and Christian Robinson’s Leo: A Ghost Story might especially love Sir Simon’s story.

I received copies of these two titles courtesy of Tundra Books/Penguin Random House Canada in exchange for honest reviews. All opinions and comments are my own. Both titles have been published and are currently available.