Welcome to one of the last stops on the Raincoast Books blog tour for Canadian author Eileen Cook‘s latest YA novel, You Owe Me a Murder!  Read on for my thoughts on the novel as well as a Q&A with Eileen. Be sure to take a look at the postcard at the bottom of the post and check out the rest of the participating bloggers.

Seventeen-year-old Kim gets more than she bargained for when she is set up for murder. Perfect for fans of One of Us is Lying, E. Lockhart, and Gillian Flynn.

17-year-old Kim never expected to plot a murder. But that was before her boyfriend dumped her for another girl. Now, Kim’s stuck on a class trip to London with him and his new soulmate and she can’t help wishing he was a little bit dead, even if she’d never really do that.

But when Kim meets Nicki, a stranger on the plane who’s more than willing to listen to Kim’s woes, things start to look up. Nicki’s got a great sense of humor, and when she jokes about swapping murders, Kim plays along-that is, until Kim’s ex-boyfriend mysteriously dies.

Blackmailed by Nicki to fulfill her end of the deal, Kim will have to commit a murder or take the fall for one.

Author Eileen Cook has a few mystery novels to her names, including titles such as The Hanging Girl and With Malice.  In You Owe Me a Murder, Cook turns once again to the mystery genre, with an unnerving young adult story that packs a few great surprises.

Seventeen year old Kim Maher is waiting to board a flight from Vancouver to London, England. She and a group of students- which includes her rather awful ex-boyfriend Connor and his current girlfriend Miriam- are on their way abroad for an international student program. We learn that Kim had planned- begged- her parents to let her go on the trip when she and Connor were together, and now she is stuck facing him and his annoying, loud new relationship for a few weeks. When a stranger named Nicki strikes up a conversation with Kim in the airport waiting lounge, they bond immediately and Kim divulges details of her ex, and Nicki divulges all about her own problems with her mom. Then, on the plane with her new friend, Kim and Nicki drink and gossip, with Kim detailing all the things she hates about Connor…and the new friends agree that it would really be better if he was dead. Well, not actually dead, Kim stresses, of course she doesn’t actually wish Connor dead, that would be awful!

In a horrifying turn, Connor dies shortly after they arrive in London, and it turns out that Nicki is behind it. And now Nicki expects- no, demands- Kim to return the favour of Connor’s murder… by Kim murdering Nicki’s mother! In the midst of Nicki’s disturbingly pathological behavior and demented ultimatum that is threatening to overtaking Kim’s entire school trip, Kim unexpectedly begins a relationship with an extremely kind and thoughtful student on the exchange program named Alex. As the pressure from Nicki grows, her threatening behavior increases to a startling moment, and Kim grows even more sick with dread that she may never escape from Nicki’s demand. Will Kim actually have to resort to a murder to escape Nicki’s imprisonment or is there another way out?

You Owe Me a Murder is at its strongest when the surprises (i.e reveals from Kim, Nicki, and other characters) come to the surface and convoluted turns from Nicki are happening; those moments, particularly in the last third of the novel, are genuinely fascinating and add a great thrilling angle to the novel. I think I would have liked earlier portions of the novel to have tightened to focus more on Kim’s tendencies that veer her into unreliable narrator territory, and on deeper dives into Nicki’s past; there is significant information exposed at the end about Nicki, with not enough time for eager readers to unpack and digest! On the whole though, Cook does so well in balancing an unhinged protagonist, a vacillating, often uncertain narrator, an international setting, and a burgeoning teen relationship- all under the shroud of a terrifying, murderous countdown.

While it might seem odd to deem a novel about a teen hounded by a diabolical stranger fun– that’s just what You Owe Me a Murder is! Fast-moving, totally readable, with a solid, overarching sinister hook to keep the reader in and guessing. If you have previously enjoyed Cook’s mystery novels, then I’d suggest checking this latest one out. Likewise, if you’re a fan of entertaining YA mysteries- think along the lines of April Henry, Jessica Warman, Caleb Roehrig, Kimberly McCreight- then You Owe Me a Murder might be right up your alley.

Q: You Owe Me A Murder feels like a departure of sorts from your previous mystery novels. In With Malice, there is the hook of memory loss and amnesia; in The Hanging Girl, there is a dive into tarot cards and psychic abilities. How did you prepare to get inside the mind of or to write a character like Nicki, who is so deeply unsettling and arguably pathological?

A: In my real life I like to think of myself as a very kind person, but I will admit that writing someone who is so nasty was SO MUCH FUN. I enjoyed the opportunity to get inside someone’s head who could be so completely immoral, who wasn’t ever held back by common decency or ethics. At times she was a bit scary to write, but there was no doubt that she made the story interesting as I could count on her to make things worse at every turn. And in fiction- that’s what we tend to like- complicated situations. However, I wouldn’t like to meet her in real life. Nicki is charming, but cold.

Thank you so much for your time! 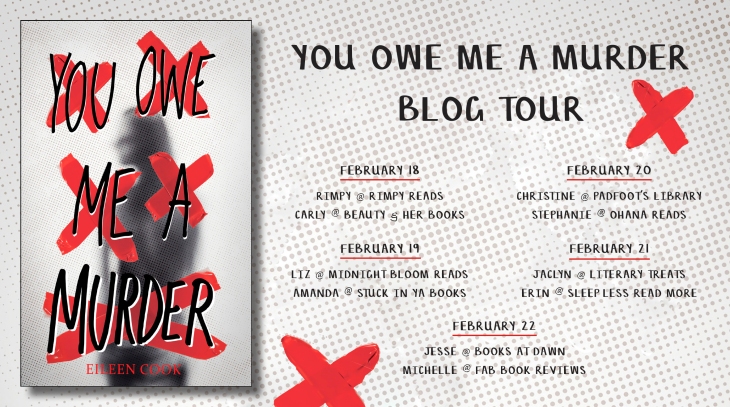 I received a copy of this title courtesy of Raincoast Books in exchange for an honest review and for the purposes of this blog tour. All opinions and comments are my own.