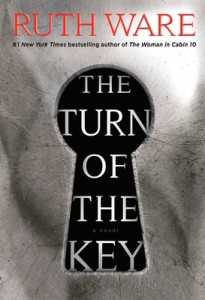 When Rowan stumbles across an ad for a live-in nanny, she’s looking for something else completely. But it seems like too good an opportunity to miss—with a staggeringly generous salary. And when she arrives at Heatherbrae House, she is smitten—by the luxurious “smart” house fitted out with all modern conveniences, by the beautiful Scottish Highlands, and by this picture-perfect family. What Rowan doesn’t know is that she’s stepping into a nightmare—one that will end with a child dead and Rowan in prison awaiting trial for murder.

Writing to her lawyer from prison, Rowan struggles to explain the unravelling events that have led to her incarceration. It wasn’t just the constant surveillance from the cameras installed around the house, or the malfunctioning technology that woke the household with booming music, or turned the lights off at the worst possible time. It wasn’t just the children, who turned out to be a far cry from the immaculately behaved model children she met at her interview. It wasn’t even the way she was left alone for weeks at a time, with no adults around apart from the enigmatic handyman, Jack Grant.

It was everything. Rowan knows she’s made mistakes. She admits that she lied to obtain the post, and that her behavior toward the children wasn’t always ideal. She’s not innocent, by any means. But, she maintains, she’s not guilty—at least not of murder. Which means someone else is.

It was unbelievable. Not just the salary- though God knows, that was a pretty startling sum. Not just the post. But the luck of it. The whole package- just falling in my lap, right when I was in the perfect position to apply.

Bestselling author Ruth Ware (The Lying Game) returns with her fifth novel, The Turn of the Key, an unsettling and gripping suspense novel featuring a terrific narrative turn. With a nod to Henry James’ horror novel The Turn of the Screw, The Turn of the Key details the story of a woman named Rowan who faces time in prison for a crime she claims she did not commit.

Told via letters to a lawyer named Mr. Wrexham, the story begins with our narrator detailing turmoil and intense dread she feels at being wrongly charged for the murder of a child- a child who was under her watch and care at the time of death. As the writing to Mr. Wrexham continues, Rowan goes through the often startling details of how her seemingly marvelous live-in nanny position in the remote Scottish Highlands soon devolved into a living nightmare of paranoia, menace, and the eventual death of a child. The Turn of the Key is told almost entirely through the letter(s) Rowan composes to Mr. Wrexham as she divulges just about every aspect of her life, and most pressingly, the detailed account of what truly happened during her brief and frightening time as the live-in nanny for the wealthy Elincourt family. Consisting of three young children, a teenage daughter, and a tremendously successful wife and husband team living on a sprawling estate, the nanny position for the Elincourt family seems a fantasy- a top-tier job. At first. As Rowan writes to Mr. Wrexham about her time at the Elincourt home, red flags begin to hum and flare… There is the Elincourt’s disturbingly invasive mansion cameras and app-based security system that seems more faulty that not, the immediately uneasy and threatening feel Rowan gets from Mr. Elincourt, and the fact two of the three young children seem unnaturally apprehensive and fixated on the devastating, deadly history of their current home. What starts as a slow and fascinating build to a seemingly supernaturally-tinged suspense novel starts to weave and slip its way into something even more sinister and disquieting.

Overall, The Turn of the Key is deeply riveting start to finish; unsettling and shocking at pivotal moments, with reveals and an ending that may equally satiate and stun the reader. When done well, atypical and/or non-traditional narrative styles are an asset, and The Turn of the Key makes the most of the letter format, arguably making the climax and end reveals all the more impactful. Readers who have enjoyed Ruth Ware’s previously published suspense novels such as The Woman in Cabin 10 or The Death of Mrs. Westaway, and fans of authors such as Gilly Macmillan, Shari Lapena, Paula Hawkins or Megan Miranda might especially relish the wonderfully moody and disturbing nature of The Turn of the Key.

I received a copy of this title courtesy of Gallery Books/Simon & Schuster Publishing in exchange for an honest review. All opinions and comments are my own.