Welcome, readers, to another holiday spotlight post! In a previous installment, I took a look at the delight that is Jon Klassen’s Hat Box. I now have the pleasure of talking about the buttery toasted deliciousness that is the Mercy Watson Boxed Set: Adventures of a Porcine Wonder, courtesy of the lovely folks at Penguin Random House Canada/Candlewick Press. From the acclaimed team of author Kate DiCamillo and illustrator Chris Van Dusen, the Mercy Watson books are best-selling and critically acclaimed series of early chapter books bursting with humour, heart, and a very special porcine wonder. This special boxed set features the complete Mercy Watson collection, six books (in paperback format) starring the lovable and amusing adventures of Mercy Watson, her family, and neighbors and friends from Deckawoo Drive! Let’s take a closer look at the Mercy Watson Boxed Set: Adventures of a Porcine Wonder:

Oh, Mercy! Pig out on the first six adventures in the New York Times best-selling series, all tucked together in one enticing box—the perfect gift!

Foiling a robber, driving a car, squeezing into a tutu—is there anything the porcine wonder won’t do in her single-minded pursuit of treats, buttered toast, or just a rollicking fun time? And who knows what other adventures twinkle in her mischievous eyes? Here, for Mercy Watson’s loyal fans and new friends, comes a big fat paperback collection of pig tales that will have readers squealing with delight. Included are:

Mercy pricked up her ears.
She was listening now.
Mercy loved butter.
She particular loved butter on hot toast.
But she would take butter any way she could get it.

If you are familiar with the work of Kate DiCamillo (The Miraculous Journey of Edward Tulane) or Chris Van Dusen (Hattie and Hudson) from their renowned individual children’s projects and haven’t yet had a chance to read any of the Mercy Watson titles, may I gently prod you in Mercy’s direction? An early chapter book series that is as marvelously and funnily written as it is wonderfully illustrated (in Van Dusen’s unmistakable, retro-classic style), the Mercy Watson collection of books takes readers on a series of zany, sweet and very funny adventures with a pig named Mercy. Adopted by Mrs. and Mr. Watson of 54 Deckawoo Drive, Mercy Watson makes a life as well as a big name for herself as a porcine wonder- and ardent lover of buttered toast. While Mercy is a constant source of consternation to the Watson’s grumpy neighbor Eugenia Lincoln, she is most often the source of delight and adventure to those friends and neighbors around her. In a series of six books, Mercy has numerous escapades, including but not limited to: a Halloween parade (of sorts) led by Mercy in an ill-fitting princess costume chasing down a cat named General Washington; a “wonky to the extreme” scenario involving Mercy, abundant buttered popcorn and an outdoor drive-in; the “Unmentionable Horror” facing Mercy when neighbor Eugenia Lincoln reports the porcine wonder to animal control; and the story of how Mercy unwittingly stops a tiny thief named Leroy Ninker and becomes a hero. Did I take the time to re-read the entire series before getting this post together? I surely did- there is just so much genuine joy, charm and funniness to be found in the Mercy Watson series! I would also like to note that for readers who love the series and wish to continue beyond the six Mercy Watson books, there are also (at present) four early chapter titles in Tales from Deckawoo Drive books (also from DiCamillo and Van Dusen), which star the supporting characters we come to know well from Mercy’s own adventures! 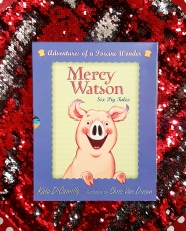 A boxed set with the complete collection of Mercy Watson titles, this is a splendid gift for fans of the books; for readers who enjoy series such as The Princess in Black, Zoey and Sassafras, Charlie and Mouse, Narwhal and Jelly, or Tales of Sasha; or for early chapter book readers looking for something wonderfully madcap and charming to read!

As a little bonus, take a look at the video below, starring Kate DiCamillo herself, as she talks about the picture book prequel to Mercy Watson series she and Chris Van Dusen collaborated on (and released in 2019!), called A Piglet Named Mercy!

I received a copy of this boxed set courtesy of Penguin Random House Canada/Candlewick Press in exchange for an honest review. All opinions and comments are my own.