If you are on the lookout for new and fantastic picture books for the winter and holiday season, I have two titles here that are absolutely worth checking out! Courtesy of friends at Penguin Random House Canada, I will be talking about: Bear Is Awake! An Alphabet Story by Hannah E. Harrison, and Red Riding Hood retold by Beatrix Potter, illustrated by Helen Oxenbury. Enjoy! 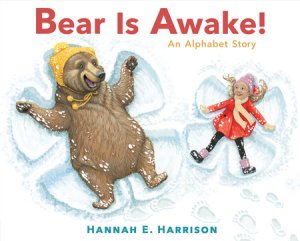 Author, illustrator and portraitist Hannah E. Harrison has a few delightful and lauded picture books to her name including Bernice Gets Carried Away, and Extraordinary Jane. In her latest picture book release, Bear Is Awake! An Alphabet Story, readers are taken on a enchanting and fantastical alphabetical adventure with a wide-awake bear and a surprised young girl. Telling a complete and engaging story through A-Z can be challenging as it is, of course, limited in direction; but when done well, it can sing! On the humourous side of alphabet picture books, I think immediately of successful and fun titles like Mo Willems’ A Busy Creature’s Day Eating, Patrick McDonnell’s The Little Red Cat Who Ran Away and Learned His ABC’s (the Hard Way), or Kelly Bingham and Paul O. Zelinksy’s Z Is for Moose. Harrison, I would argue, joins the ranks of excellence in alphabetical stories simultaneously very funny and endearing with Bear Is Awake!. Superbly, divinely illustrated- with one of the most lovable, natural and facially expressive bears I have ever had the pleasure of seeing in a picture book- Harrison’s tale takes us all the way from “Aa awake” to “Zz zzzzzz” and had me in giggles and stitches throughout. Bear finds himself awake in what appears to be the middle of winter, and makes his way to a snow-covered cottage, ringing the doorbell, entering and startling a young girl who exclaims “eek!”. When an idea strikes, the young protagonist take the bear (now wearing a yellow bobble knit hat!) to the “Ll library” and researches hibernation. Helping bear and preparing bear for a successful return to the woods provides hysterical as well as truly sweet moments (don’t miss bear with a bear-shaped honey bottle on his head), and readers will likely sigh with happiness at the book’s end. This is a truly marvelous reading experience, stunning and memorable in presentation and format. I cannot stress enough just how vividly detailed and perfect Harrison’s gouache illustrations are here! (You can take a look here at more of the artist’s animal paintings for more examples). Readers may very possibly fall in love with bear’s effervescent spirit, as well as the young girl’s wonderful take-charge, can-do attitude, resourcefulness and caring nature. Bear Is Awake! is one of those picture books that begs for multiple readings (and makes for solid read aloud fare!); and it will likely keep a variety of readers entertained with a blend of words stemming from the more simple like “Hh hat” to more complicated like “Ii intrigued”. Be sure to check Hannah E. Harrison’s gorgeous book out!

Once upon a time there was a village child who was so pretty- so pretty as never was seen…
The good woman, her mother, made the child a little hood of scarlet flannel, and the scarlet set of her bonny black curls, like the flame-coloured leaves round the heart of a poppy flower.

Now, readers of any and all ages may already be familiar with a version or two of Little Red Riding Hood/Red Riding Hood. There are indeed many to choose from, and many interpretations of it! This version of Red Riding Hood, illustrated by beloved and acclaimed Kate Greenaway Medal winning artist Helen Oxenbury, is a retelling written over a century ago by an English writer and artist you may have heard of: Beatrix Potter! There is a must-read foreword from Helen Oxenbury at the book’s opening, which talks about how she was immediately drawn to Potter’s version (itself adapted from the French of Charles Perrault) due to the “the story [being] so rooted in the English countryside”. Potter’s version, as Oxenbury notes, also has a “darker ending” and features a “sly, cunning” study of the wolf that she delighted in sinking her teeth into. A story that highlights the wolf’s calculating nature, desperate hunger, fear of the singing woodcutters nearby, as well as Red Riding Hood’s time spent meandering in the lush countryside, Potter’s retelling is quite intriguing. The set-up here of little Red Riding Hood, the sweeping nature of the woods, and the character of the slippery wolf are forefront, with the danger that looms for Red Riding Hood’s grandma and Red herself hitting just about at the book’s end. It’s an effective take, as the dastardly actions of wolf are quick and even more shocking with such little fanfare about it! Also effective and tension-building is the fact the when Red Riding Hood reaches her grandma’s house, wolf is already in bed in disguise as grandma, and manages to get a slowly-to-get-suspicious Red almost nose-to-nose with him on the bed! Potter’s version ends strongly with an ominous strike regarding the fate of Red- though Oxenbury, in the book’s final illustrative spread, has left some room for a not-as-morbid ending for Red Riding Hood and her grandma! This is a notable version of Red Riding Hood that works terrifically due to the combination of Beatrix Potter’s measured, droll and clear storytelling and Helen Oxenbury’s classical-leaning art style, with the star of the tale arguably being the nefarious, salivating, brilliantly depicted wolf. Readers who are fans of the illustrative style of Oxenbury (We’re Going on a Bear Hunt, written Michael Rosen), those who are looking for a new, more forbidding version Red Riding Hood try, or indeed for those readers who delight in classic fairy tales, this adaptation is a darkly enticing pick.

As a bonus, please enjoy this video via Walker Books, called Helen Oxenbury: A Life in Illustration, a feature about the work of the beloved and acclaimed author and illustrator!

I received copies of these titles courtesy of Penguin Random House Canada in exchange for honest reviews. All opinions and comments are my own. Titles have been published and are currently available.