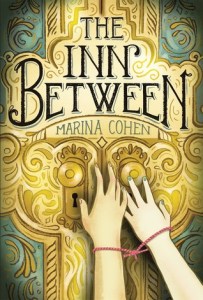 The Shining meets “Hotel California” in this supremely creepy middle grade novel about the bizarre things that happen to two girls stranded at a desert inn.

Eleven-year-old Quinn has had some bad experiences lately. She was caught cheating in school, and then one day, her little sister Emma disappeared while walking home from school. She never returned.

When Quinn’s best friend Kara has to move away, she goes on one last trip with Kara and her family. They stop over at the first hotel they see, a Victorian inn that instantly gives Quinn the creeps, and she begins to notice strange things happening around them. When Kara’s parents and then brother disappear without a trace, the girls are stranded in a hotel full of strange guests, hallways that twist back in on themselves, and a particularly nasty surprise lurking beneath the floorboards. Will the girls be able to solve the mystery of what happened to Kara’s family before it’s too late?

Canadian author Marina Cohen jumps into the world of children’s horror stories with her unsettling middle grade debut, The Inn Between. Offered in the book description as a children’s lit take comparable to The Shining, I also found myself thinking quite often of Alice Sebold’s The Lovely Bones as well as Claire Legrand’s terrifically creepy (and frightening) The Cavendish Home for Boys and Girls. Radiating a strong tone of unease and foreboding from the get-go, The Inn Between is a book I gulped in one sitting: once I got into the strangely nightmarish tone and hook of the story as well as protagonist Quinn’s quietly grieving voice, I could not leave until the very end.

While the primary focus of the novel is that of Quinn and her best friend Kara finding themselves at the mercy of a haunting and terrifying Victorian inn, there is also a secondary storyline running parallel: that of the disappearance of Quinn’s younger sister Emma. For some parts of the novel, I must say that I found myself more compelled by that secondary storyline of Emma’s disappearance than the primary. This might have do with the fact that the twist of mystery promised in the description (just what is the Inn Between?) is one I gauged early on in the story, taking away some impact of the big reveal(s). That being said however, the two lines come together in a devastating and moving manner toward the very end of the novel. Cohen quietly weaves an incomprehensible level of sadness and heartache into this story, along with an exploration of love, bereavement and redemption that gently elevates the story as a whole.

Overall, Cohen’s debut is a solid foray into the world of children’s horror/suspense stories. Readers who tend towards novels thick with sinister and strange atmosphere; those who have enjoyed titles such as the Claire Legrand title mentioned above; Nikki Loftin’s The Sinister Sweetness of Splendid Academy; or anything by Neil Gaiman, Joan Aiken, or Mary Downing Hahn might especially appreciate the macabre and grief of The Inn Between.