Review posts featuring a children’s lit title and young adult lit title don’t often (if ever!) appear on this site. However, after reading Kate Messner’s Breakout (the children’s title) and Sarah Crossan’s Moonrise (the young adult title) in succession, I thought it might be interesting to pair them together in a review. Both titles deal with the criminal justice system (incarceration, punishment, and the complicated responsibility of prison wardens) albeit in different capacities, degrees and vantage points. While weighty and controversial issues surrounding the justice system and prison system are never off the grid, I feel as though these reads- and the subjects they proffer for sincere examination- might be considered even more timely and significant. (Just a warning, there are some plot spoilers ahead in the reviews!).

In Kate Messner‘s latest middle grade novel Breakout– already receiving a number of positive critical reviews- multiple middle school characters tell the complicated story of what happened over the course of a summer in which two prison inmates escaped a high-security prison located in the heart of their small town of Wolf Creek. Best friends Nora and Lizzie, along with new classmate Elidee, through journal entries, recorded conversations, text messages, posters, new clippings, and recorded morning announcements (and the addition of Nora’s younger brother’s comics), track the events, aftereffects, and transformations of their community after the breakout of two maximum security prisoners. Breakout tackles and confronts a number of heavy-hitting issues, including privilege, spreading of misinformation, prejudice and racism (in and out of the prison), and what foolishness and fear can breed- or inflame. Elidee’s narrative is a standout here: her being a newcomer to town, her being a racial minority in Wolf Creek, and the the fact that her brother is serving time in Wolf Creek’s prison works to highlight the biases of even the most well-minded and well-meaning children and adults. Moreover, through Elidee’s narrative, Messner rather wonderfully ties in the brilliant and influential voices of Jacqueline Woodson, Lin-Manuel Miranda, Nikki Grimes (among others): as Elidee finds Wolf Creek and its residents increasingly stifling, explicitly and appallingly racist at times, her study of lyricists and poets inspires her to write and try to make her own breakout from Wolf Creek. Breakout is definitely a read to get dialogue and self-reflection going; I can see elementary classes getting their teeth into this layered read. Well-written, absorbing and truly substantial in terms of content and subject matter, Breakout is a read that offers much for serious consideration. 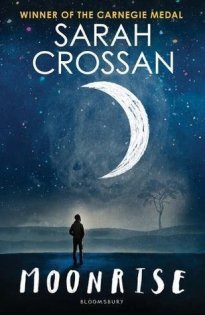 Sarah Crossan‘s newest young adult novel Moonrise is a read that moved me to tears, and like Breakout, one that I keep thinking back on. Crossan, author of the acclaimed novels One, Apple and Rain, and Ireland’s new Children’s Literature Laureate, has written a novel in verse about a seventeen year old whose older brother receives the date of his execution while on death row in Texas. There is, as one might expect, a tremendous amount of sadness and brutality in this novel, as well as the pervasive atmosphere of desperation and tension that threatens to overflow at every turn. When readers meet Joe, we learn that he hasn’t seen his older brother Ed in ten years- since Joe was seven years old. While Joe and his older sister Angela have never forgotten about Ed and his incarceration, the prospect of his being put to death- even while serving time on death row in Wakefield, Texas- seemed unreal. But when Ed receives his date of execution, and chances for appeal are almost out, Joe makes the difficult trip to Wakefield. The reason for Ed’s incarceration is a slow reveal: the exploration into his making a false admission of guilt and claim of innocence becomes almost secondary to Joe and Ed’s reunion; their remembrances of a childhood fraught with a terrible parent; Joe’s memories of some moments of true happiness with Ed; and how Joe, Angela and Ed come to fathom the looming possibility of saying a final goodbye. Crossan’s writing is deceptively smooth and effortless- so much profundity is imbued in Joe’s often stark narrative. As with Kate Messner’s Breakout, Moonrise offers so much for contemplation here regarding fallacies and serious fractures within the justice and prison systems (and regarding those who work on the inside). Moonrise is a potentread, where the knowledge of unalterable, irrevocable character decisions and repercussions make for a haunting, unsettling read. Readers who have previously read and appreciated Crossan’s affecting work, readers of novels-in-verse, and those searching for contemporary, weightier YA, might especially be interested in seeking Moonrise out.

I received copies of Breakout and Moonrise courtesy of Raincoast Books in exchange for honest reviews. Thank you! Both titles have been published and are currently available. All opinions and comments are my own.