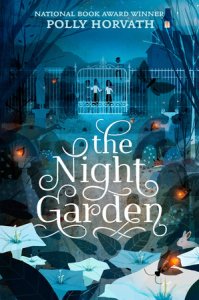 It is World War II and Franny Whitekraft lives with her parents, Sina and Old Tom, on a farm on Vancouver Island. Their peaceful life is interrupted when their neighbor, Crying Alice, begs Sina to watch her children while she goes to visit her husband at the military base where he is stationed because she suspects he’s up to no good. Soon after the children move in, letters start to arrive from their father and they don’t understand what they mean until it is too late to stop him from doing something that threatens to change their whole lives. Can the ancient, forbidden night garden that supposedly grants everyone one wish help? And if it does, at what cost?

“See the sun sinking over the edge of the sea? This day is done. This day will never come again. Everything has changed. Remind yourself of that every morning and every night, and then you won’t come to expect anything but what is. It’s expecting anything but what is that makes people unhappy.”

What a surprising and fantastic read this is! In Polly Horvath‘s terrifically magical The Night Garden, the Newbery Honor and National Book Award winning author takes readers on a beautiful, often funny, often extraordinary adventure.

This middle grade novel takes place in 1945 on Vancouver Island, over the course of the last months of World War II, with twelve year old Franny Whitekraft as our narrator. Franny has been living with Old Tom and Sina since she was a baby due to “a series of mistakes involving their neighbors”, which included a fire and an adoption worker having a heart attack. Franny lives a life of comfort and habit with her mom and dad in their Victorian home on a rambling property called East Sooke Farm, just outside of Victoria. Franny and her parents’ regular- some would argue “medieval”- life comes to major, irrevocable upheaval when a desperate, overwhelmed and emotional neighbor they call Crying Alice has to attend to her possibly unstable husband named Fixing Bob, a plane mechanic for a top secret Canadian military plane called the Argot. Crying Alice not only needs to leave her three children in the care of Sina, Old Tom and Franny, but also has no idea of when she might return for her children. While all three Whitekrafts attempt to adjust to Winifred, Wilfred, and Zebediah in their lives, the bizarre mystery of Fixing Bob’s potentially fatal trouble comes to light, and the closely guarded magical night garden that Old Tom forbids anyone from entering takes center stage. Horvath weaves a great number of elements in The Night Garden; readers may wonder how on earth the hermit who lives off the East Sooke Farm property, or the Whitekraft’s terrible yet unintentionally funny new cook named Gladys, or the inclusion of Sina believing she has seen a UFO, or the actual wish-granting night garden itself will tie together… but they all do in the end, in some truly unexpected, very moving ways. There is also a bit of wonderful madcap humour in The Night Garden, which brings some levity and bursting humour as the novel delves into more serious scenes and some frightening, heart-stopping moments.

Overall, a wonderful and unexpected read that effortlessly blends magic, poignancy and adventure with a good dose of surprising comedy. I was very taken in by The Night Garden; deeply invested in Franny’s dry and frank narration of the incredible moments of her twelfth year from beginning to end. Readers who enjoy Canadian children’s literature, the work of authors such as Kit Pearson, Katherine Applegate, Kimberly Brubaker Bradley, Wendy Mass, or titles such as Once Was a Time by Leila Sales that work magical elements into affecting stories might especially adore the beautiful peculiarity of The Night Garden.

I received a copy of this title courtesy of Penguin Random House Canada in exchange for an honest review. All opinions and comments are my own.