Marianne Dubuc, the acclaimed Canadian author and illustrator behind picture books like Mr. Postmouse’s Rounds and The Lion and the Bird, brings readers Up the Mountain Path. Radiating kindness and sweet humour, Up the Mountain Path tells the story about Mrs. Badger and what happens after she meets a new friend while going about her usual Sunday walk “to the mountain’s peak”. We see Mrs. Badger, who we learn “is very old [and has] seen many things”, as she sets off from her house and garden. On the way to the mountain she greets friends along the way, picks edible mushrooms for her fox friend Alexander, and even helps a turtle who needs righting. Readers will notice that there happens to be someone- an adorable someone with whiskers, and pointed orange ears- who happens to sort-of-hiding and sort-of-popping up wherever Mrs. Badger goes. Mrs. Badger acknowledges her feline shadow with a kind offer to share her food, and soon becomes acquainted with a new friend named Lulu who would love to know how to climb the big mountain. As Mrs. Badger encourages her new cat friend (who believes they are too small for such a journey), and teaches them important things (slippery rocks to watch for, the perfect kind of walking stick), Lulu the cat discovers an new, incredible world waiting for them up the mountain path. Dubuc has an extremely deft hand in presenting the loveliest, most genuine of friendships as well as loss and change in the quietest, most thoughtful of ways. In Up the Mountain Path, readers see the tides changing as Mrs. Badger’s age begins to slow her down little by little and Lulu begins to take the reins as the twosome’s stronger and compassionate leader. A beautiful ending sees a return of sorts to Lulu’s first expedition with Mrs. Badger and a promising beginning. Up the Mountain Path is another excellent picture book from Dubuc, full of heart, poignancy and Dubuc’s splendid, distinctive illustrations. 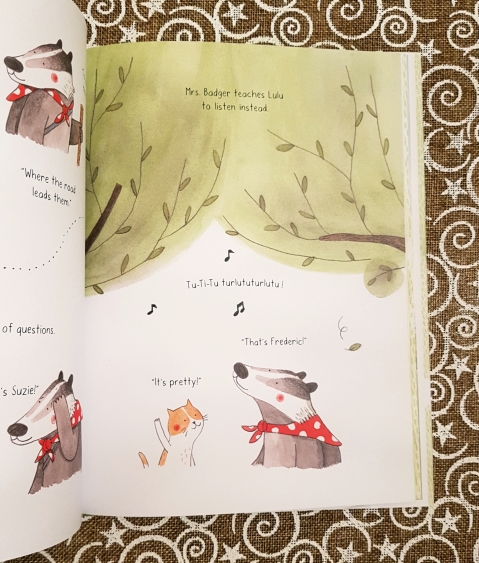 The Night Box is the picture book debut from author and poet Louise Greig and illustrator Ashling Lindsay. An elegant, poetic and incredibly illustrated read that would make for beautiful bedtime reading, The Night Box tells the story about a young boy named Max who carries the key to a magical, wondrous box that holds and releases Day and Night. As the story begins we see Max playing outside with what appears to be a golden key on a red yarn around his wrist. As his mother calls to him that “it’s time for bed” “Max waves goodbye” as sleepy Day waits for Max to turn the “key in the Night Box”. What will happen when Max turns the key? How does the Night Box work? In a gorgeous spread, readers see “Day slips inside as Night sweeps out” with a great swath of grey and then: “Darkness tumbles into the air. It dances and whirls around the room. It goes under the bed, under the chair- everywhere!”. In beautiful prose, Greig describes the often-considered scary parts about nighttime (e.g. the suddenly loud noises, the strange taps on the window), and presents them as everyday, nice things we don’t need to fear. At Night, readers get to see the world beyond Max’s window, with a look at the animals who rest at Night, and those that play. The Night Box paints an enchanting and altogether tranquil look at the turn from day to night, emphasizing marvels in the world as well as childhood comforts like “a bear and a soft, warm bed”. The close of the story comes as Night now begins to feel sleepy, Day begins to stir, and as Max opens the box, “a new song begins”. Overall, The Night Box is a truly lovely, tender, and imaginative picture book that makes for perfect bedtime reading…or for readers looking for a little escape into quietude and delight. 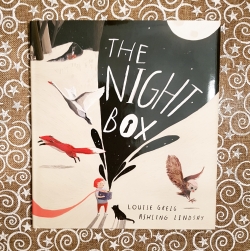 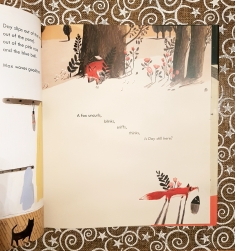 I received copies of these titles courtesy of Raincoast Books in exchange for honest reviews. All opinions and comments are my own. Both titles have been published and are currently available.