Two picture books on review today courtesy of my friends at Raincoast Books! I will be talking about two lovely stories: A Friend for Henry by Jenn Bailey, illustrated by Mika Song, and Otto and Pio by Marianne Dubuc. Happy reading! 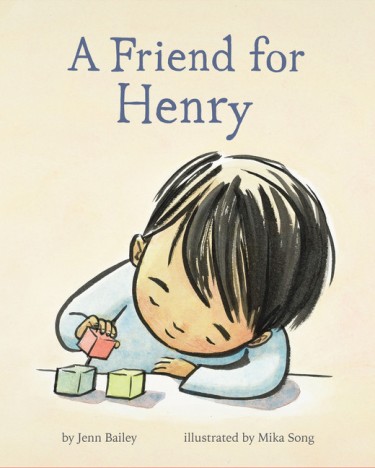 In A Friend for Henry, by author Jenn Bailey and illustrator Mika Song (Picnic with Oliver), readers are taken along a friend search with young protagonist Henry. As Henry thinks about who could possibly make for a good friend from Classroom Six, he considers the following:

Classmate Vivianne is “a kaleidoscope, a tangle of colors…and clackety shoes”; Samuel is “a thunderstorm…kind of scary if you didn’t have your blanket”; and neither Jayden nor Riley will do! As Henry retreats back to watch Gilly swim in her fishbowl, a classmate named Katie also watches Gilly. Hmm. As Henry thinks about Katie and the things she can do (like go on the Big Slide, which Henry does not like!), the two soon find themselves bonding over playing blocks and things they don’t like. This is a beautifully tender story- soft, straightforward and poignant-that is multi-layered: A Friend for Henry not only touches upon the larger subject of friendship (and making friends), but also upon how a child on the autism spectrum might think about, find, and discover a friend. You can read this wonderful interview here via Romper with author Jenn Bailey, who was enlightened from the experiences of one of her children who is on the autism spectrum. Mika Song’s ink and watercolour illustrations are a gorgeously light, expressive and fluid match for the story; perfectly capturing Henry’s and his classmates’ articulations, actions, and more serene and thoughtful moments. A Friend for Henry is an insightful, heartening, perfect-for-read-aloud story about one young boy’s particular perspective on trying to make and connect with one great friend. 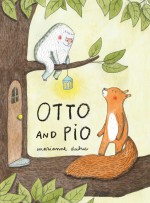 Canadian author-illustrator Marianne Dubuc is the award-winner behind titles such as Up the Mountain Path, Mr. Postmouse’s Rounds, and The Lion and the Bird. Dubuc’s stories often touch upon the importance and resonance of friendship and families and Otto and Pio falls under that beautiful umbrella.

Readers meet a “little squirrel named Otto” who has made a home for himself in a wonderfully grand, ancient and leafy tree. Otto lives alone and seems to have his habits down; even when he sees a “strange green ball” just a few steps from his front door, he simply steps “over the ball” and carries about on his way. When the ball eventually cracks and a “very small, very round, and very furry” creature peeps out calling “MOMMY!”, Otto firmly notes that he is not the creature’s mommy and plans to do what he can to locate the furry creature’s mom. With some kindness and consideration (but still with caution), Otto invites the creature- who now goes by “Pio!”- into his home. Only…the search for Pio’s mom isn’t turning anything up…and every morning Otto wakes to find Pio even larger than the day before. What is Otto to do if Pio’s mom does not come back? And is the fact that Pio is thoughtful and makes a wonderful soup for Otto enough to counter the fact that the furry creature is now tremendously large and (not-on-purpose) bursting Otto’s beloved home apart? Otto and Pio is by turns a comical and lovingly sweet story, aided by Dubuc’s splendid illustrations that play up Pio’s fuzziness, general adorableness and dramatically increasing size against Otto’s tiny stature and routines. The fact that Otto is not naturally the friendliest of accidental and sudden caregivers- he likes his tidy home, being on his own, and calling things as he seems them- makes the action-filled climax and denouement somehow even sweeter and funnier. Otto and Pio is a wonderfully told story with a great arc. The general concept may be one we have seen before (think along the lines of Mother Bruce, Room for Bear, Wolfie the Bunny, or Quackers), though Dubuc’s particular twist of storytelling and lush pencil and watercolour art makes Otto and Pio such an altogether modern, unusual and fantastic tale.

I received copies of these titles courtesy of Raincoast Books in exchange for honest reviews. All opinions and comments are my own. Titles have been published and are currently available.