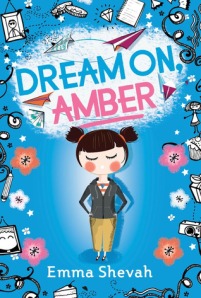 My name is Ambra Alessandra Leola Kimiko Miyamoto. But call me Amber. I have no idea why my parents gave me all those hideous names but they must have wanted to ruin my life, and you know what? They did an amazing job.

As a half-Japanese, half-Italian girl with a ridiculous name, Amber’s not feeling molto bene (very good) about making friends at her new school.But the hardest thing about being Amber is that a part of her is missing. Her dad.  He left when she was little and he isn’t coming back. Not for her first day of middle school and not for her little sister’s birthday. So Amber will have to dream up a way for the Miyamoto sisters to make it on their own.

Welcome to a special feature spotlighting the middle-grade fiction debut of Dream On, Amber by Emma Shevah!

With a certain flair, bustle  and ache that reminds me of Louise Rennison, Jeff Kinney, Alan Silberberg, and Tom Angleberger’s offerings, Dream On, Amber is a simultaneously funny and bittersweet read.

Through Amber’s charming and swift first-person narrative, we’re brought into her ever-changing, confusing, and slightly anxious world. Brought up by her Italian mom Bob (Roberta) and their Nonna, Amber and her six year old lively sister Bella have one major unknown in their lives: their Japanese father who left one day when Amber was six and Bella was one. Not only is Amber one of the few biracial kids at her new middle school, but she also is one of the handful of students enrolled in a school-based ‘counseling’ class. An amalgamation of events including: her younger sister being taunted at school; a menacing classmate; her big lie to Bella their father; and more questions than ever about fitting in and why her father might have left; leave Amber with heightened worries and phobias that come to a bursting point.

In an unexpected turn of narration and arc, Amber begins to look to her dad for advice and converses with a figment of her dad about her life, her fears, and what she should do. It’s an interesting shift in tone, and provides a richer angle for getting to know Amber; but I am not entirely convinced of its necessity. I think that with an already-packed story with multiple topics this particular direction- at times- read as an add-on. As a whole, though, I did enjoy Dream On, Amber: Amber’s relationship with her sister and her Nonna, were especially rich and lovely, as were Amber’s exploration of her passion for art and her new-found friendship.  Perhaps it would have made for a more complete story to have Amber and Bella learn the truth of their father’s disappearance from their lives– but perhaps Shevah has more stories in mind for these likable and grounded characters?

For readers who are clamoring for contemporary children’s lit, for something that combines elements of humour, and coming-of-age with deeper resonance, Shevah’s debut is a solid pick. Those who love the ‘doodle’ style, or journal style writings along the lines of The Popularity Papers, Gossip from the Girls Room, Notebooks from a Middle School Princess, or The Strange Case of Origami Yoda and are looking for something new to explore might also really enjoy this title. (Verdict: Good/Very Good)

Read on to explore more about the (including an excerpt), the author, and how you can enter a Rafflocopter draw for a chance to win copy of Dream On, Amber, courtesy of Sourcebooks!

Praise for Dream On, Amber:

“By turns playful and poignant, in both style and substance, this coming-of-age novel will hook readers from the first page to the last.”—School Library Journal, STARRED review

“Amber’s effervescent and opinionated narration captivates from the start, making it easy to root for her as she strives to conquer the “beast” of her worries and thrive at home and at school.”—Publishers Weekly, STARRED review

“Shevah tenderly captures the void of growing up without a father yet manages to create a feisty, funny heroine… A gutsy girl in a laugh-out-loud book that navigates tough issues with finesse.” –Kirkus, STARRED review

“[This] novel is a charmer…While its humor and illustrations lend it Wimpy Kid appeal, its emotional depth makes it stand out from the pack. Molto bene!”– Booklist, STARRED review

My name is Ambra Alessandra Leola Kimiko Miyamoto. But call me Amber. I have no idea why my parents gave me all those hideous names but they must have wanted to ruin my life, and you know what? They did an amazing job.

As a half-Japanese, half-Italian girl with a ridiculous name, Amber’s not feeling molto bene (very good) about making friends at her new school.But the hardest thing about being Amber is that a part of her is missing. Her dad.  He left when she was little and he isn’t coming back. Not for her first day of middle school and not for her little sister’s birthday. So Amber will have to dream up a way for the Miyamoto sisters to make it on their own.

Emma Shevah is half-Irish and half-Thai born and raised in London. She has lived in Australia, Japan, India (her first child was born in the Himalayas) and Jerusalem before moving back to the UK. Emma has busked as a fire-juggler, been a restaurant manager, a copy writer, an English teacher, and is now a blogger and author.

Excerpt from Dream On, Amber

Bella came in wearing her matching pink nightdress, pink dressing gown, and pink slippers with Hello Kitty all over them. I just don’t get why people like Hello Kitty. I know it’s Japanese and supposed to be kawaii (cute) and everything, so maybe I should like it, but it’s just a picture of a cartoon cat’s head. I mean, seriously, what’s the big deal?

Bella’s hands were behind her back like she was hiding something. She looked much happier than she did when we got home from the party. She moved her arms to the front and handed me a sealed envelope.

“What’s this?” I asked, putting my sharpener down.

“Can you mail it for me tomorrow?”

I looked at the front of the envelope. There was nothing written on it.

“None of your beeswax, Mrs. Nosy Pants.”

“Um…okay. So you…you want me to put it in the mailbox?”

“But how is the mailman going to know who to give it to if it has no name on it?”

She lay down on her belly on the floor and with her red crayon from the dollar store (well, she wasn’t borrowing any of mine), she wrote on the front of the envelope: “TO MY DAD.”

I looked at her.

“But there’s no address on it—”

“The mailman will know where he lives. He knows where everyone lives.”

I sighed. What was I supposed to tell her? She was too little. She didn’t get it. So I took it and put it on my desk, just to make her happy.

I know I shouldn’t have done it and it’s probably against the law and everything but when she went out of my room, I opened it.

My nam is Bella and Im your dorta. My bithday party is on Sunday 16 Speptmbr and I rely want you too come. And I neid you to play with me in the park and posh me on the swing. Please come home

P.S. Please buy me a perpel Swatch wach and Sparkle Girl Julerry Makar for my bithday.

I didn’t know what to do. Obviously, I wasn’t going to mail it without an address on it. So instead, I put it in my secret place. If you pull the bottom drawer of my dresser all the way out, there’s a space under it on the floor where I put my most sacred things. I had a coin that I found in Hyde Park that I’m sure is Roman or Viking and one day I’m going to sell it and get mega rich. I had a few other cool things in there too. Some of them are embarrassing, like key-rings I made out of lanyard strings when I was, like, seven and valentine cards my mum sent me. Stuff you can’t exactly throw out but really don’t want anyone to see. The letter wasn’t one of my sacred things but where else was I going to put it?

I also had a picture of my dad holding me when I was a baby that I sneaked out of Nonna’s album. Obviously, we have a whole bunch of photos of him in that album, but I wanted one for myself. One of him with me. Just to prove to myself that he did actually exist and hold me once, and he even looked proud. I don’t look at that photo much because it makes me angry. I know it doesn’t make sense to keep it, but there you go. Not everything makes sense. If it did, he would never have left in the first place.

There was another knock on my door, so I quickly closed the drawer.

Bella stuck her head in.

“When do you think he’ll get it?” she asked.

“Well, they have to find him first. It’s not easy, you know. It takes teams of detectives months to find missing people.”

She walked in to my room and said, “Oh,” and did that thing where she points her toes inward and puts one foot over the other, like her toes are hugging.

“Do you think he’ll get it before my birthday?”

“I don’t know, Bella. I don’t think so. But if by some weird miracle he did get it before then, I’m sure he’d come to your party.”

Bella unhugged her toes and put her hands on her hips. “Amber?”

“How do you know I want Dad to come to my party?”

“Well, it’s kind of obvious, Bella. You did ask if he’d get it before your birthday.”

The letter wasn’t my biggest problem at that point. I was so worried about starting my new school in the morning that I couldn’t get to sleep for ages. When you can’t sleep, your mind starts going a bit doolally. Well, mine does anyway. I start thinking all kinds of crazy things. And eventually the problem with Bella and her letter worked its way into my churning brain.

It was kind of mean and everything but there were times I really wished Bella wasn’t my sister. But knowing there was a huge hole where our dad was supposed to be wasn’t much fun either. The more I thought about it, the more I realized that maybe, just maybe, I could do something about it. I could save Bella from years of torture with one quick solution.

I decided to pretend to be my dad and write back to her, you know, to make her feel better.

And that was it.

The most ingenious idea I’ve ever had lit up my mind like a firework.

I received a digital copy of this title courtesy of Sourcebooks Jabberwocky via NetGalley in exchange for an honest review. Thank you! Review blurbs, excerpt, buying links, social media links, as well as giveaway have all been provided by Sourcebooks.