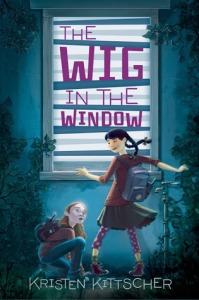 Readers who love contemporary middle grade mystery titles, I have a recommendation for you! If you have not yet had a chance to delve into Kristen Kittscher‘s Young and Yang mystery series, then I highly recommend giving them a whirl.

I adore reads featuring resourceful, brave and unique female protagonists- think Harriet the Spy, Anastasia Krupnik, Matilda, Claudia Kinkaid- so the Young and Yang series caught my attention from the beginning. In addition to featuring some terrific female protagonists, Kittscher also has such a way with clever dialogue and in blending the zany and effervescent with the suspenseful (and sometimes downright chilling!).

In book one, The Wig in the Window, we meet seventh graders and best friends Sophie Young and Grace Yang. Both Sophie (our narrator) and Grace are interested in detective and investigative work. Having to be extremely inconspicuous on their nighttime spy maneuvers- on account of protective parents who would NOT approve of their risky work- the girls do a lot of work at nighttime. But one night, Grace and Sophie happen to witness something horrific in the home of their slightly oddball school counselor. While what Sophie and Grace end up witnessing at their counselor’s home ends up not being murderous in nature, very peculiar things start happening around the girls’ school and neighborhood. The Wig in the Window is such a delightful read- full of more excitement and suspense than you may imagine!

In The Tiara on the Terrace, when we meet up with Sophie and Grace again, they seem to be at some odds regarding their spy work. While Sophie is more into her investigative work and research than ever, Grace appears to have lost some enthusiasm. That appears to change when the two discover a possible murder scene while preparing for a huge community festival. When the police seem content to note the case as an accident, both girls decide to follow their gut instincts and clues that point to murder. As ever, Sophie and Grace are dynamite spies and observers; clever and inventive. We also have the awesome addition of new friend- and genius- Trista (who we meet in book one). I absolutely love the character of Trista and how much time is given to their dynamics as a spy team and as a group of friends. Kittscher also spends more time in this novel exploring Sophie’s fears about losing her best friend to more popular kids, as well on Sophie’s more-than-friend feelings for one particular classmate. I would say that while The Tiara on the Terrace is less action-packed and the plot line not as unpredictable as book one, there are important developments made here that pave the way for more intriguing future adventures!

Overall, Kittscher’s mystery series is well-written, fantastically fun, and presents some wonderful main characters. Readers who favour mysteries, adventures titles, or thrillers featuring cool heroines, and those who enjoy the work of authors such as Robin Stevens, Trenton Lee Stewart, Gordan Korman, or Wendelin Van Draanen, might especially enjoy this series. Currently, there are two titles in the Young and Young series (both are out now), and I sincerely hope that we are lucky enough get more novels about Sophie and Grace’s investigations!