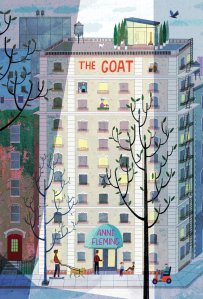 When Kid accompanies her parents to New York City for a six-month stint of dog-sitting and home-schooling, she sees what looks like a tiny white cloud on the top of their apartment building. Rumor says there’s a goat living on the roof, but how can that be?

As Kid soon discovers, a goat on the roof may be the least strange thing about her new home, whose residents are both strange and fascinating.In the penthouse lives Joff Vanderlinden, the famous skateboarding fantasy writer, who happens to be blind. On the ninth floor are Doris and Jonathan, a retired couple trying to adapt to a new lifestyle after Jonathan’s stroke. Kenneth P. Gill, on the tenth, loves opera and tends to burble on nervously about his two hamsters — or are they guinea pigs? Then there’s Kid’s own high-maintenance mother, Lisa, who is rehearsing for an Off Broadway play and is sure it will be the world’s biggest flop.

Kid is painfully shy and too afraid to talk to new people at first, but she is happy to explore Manhattan, especially the Metropolitan Museum of Art and Central Park, where she meets Will, who is also home-schooled and under the constant watchful eye of his grandmother. As Kid and Will become friends, she learns that Will’s parents died in the Twin Towers. Will can’t look out windows, he is a practitioner of Spoonerism, and he is obsessed with the Ancient Egyptian Tomb of Perneb.

When Kid learns that the goat will bring good luck to whoever sees it, suddenly it becomes very important to know whether the goat on the roof is real. So Kid and Will set out to learn the truth, even if it means confronting their own fears.

“Once there was a mountain goat who lived in New York City.”

Last year, I was immediately taken in with two titles from independent Canadian publisher Groundwood Books: A Boy Named Queen and Kabungo. Both of those short novels were entirely their own being, unusual and great, stayed with me through the course of the year, and ended up my on best of 2016 lists. Now in 2017 and almost halfway through the year, I think I might be able to say that Groundwood Books has done it again with Anne Fleming’s The Goat: one of the most wondrous, curious, heartbreaking and funny books I have had the pleasure of reading this year.

The book description provides an ample- and concise- outline of the story, so I won’t get into that much here. I would like to stress though that if you think the plot sounds too peculiar, or with too many characters, or too much quirk, just let Fleming’s leveled and focused writing take you along for this unforgettable journey. A multitude of singular characters- circling around young protagonist Kid and her newly-made friend Will- knit together in lucky and tremendous ways as their focus becomes one and the same: find the elusive goat supposedly hiding somewhere in a New York City twelve-story apartment building. Before the big build-up to Kid and Will’s final search for the goat, readers gain insight to multiple storylines involving Kid’s new apartment neighbours. Some of the storylines include: a senior couple struggling to re-connect and communicate after the husband’s stroke; a young skateboarding bestselling-author who can’t quite fathom why pigeons are making such bizarre hoofing noises on his apartment ledge; and a man fighting with a life-changing decision made while spreading his father’s ashes on a hike in the woods. Covering a plethora of subject matters, from the darker, heartache-inducing to the joyful and wacky, The Goat packs such amazing depths of richness and surprise in its 155 pages.

Imagine, if you will, mixing the writing of Louise Fitzhugh, A.S. King, E.L. Konigsburg and Rebecca Stead, with generous dose of Norton Juster, and you might get something along the lines of The Goat. If that sounds like a dream to you, then I implore to track down this title and savour it. If you are looking to try something outside of your comfort zone with a children’s fiction title that reads as eloquent and capable as any adult title I have read lately, then look no further than this title. Truly unique, gorgeous and unexpected, The Goat is an excellent read.

I received a copy of this title courtesy of Groundwood Books/House of Anansi in exchange for an honest review. All opinions and comments are my own.