This week: children’s fiction titles! The following six titles are a mixture of ones from debut authors and ones that are totally new-to-me-authors. There is Canadian author Adrienne Kress’s The Door in the Alley, which looks and sounds like the start of terrifically fun adventure/mystery series; Melissa Savage’s Lemons, a Bigfoot-centred adventure/mystery; and Paul Mosier’s contemporary and contemplative-sounding Train I Ride. Then there is the wonderfully creepy and dark-sounding The Gravedigger’s Son by Patrick Moody; Kristi Wientge’s contemporary middle grade debut Karma Khullar’s Mustache; and a beautiful and unusual-sounding fantasy called The Unicorn in the Barn written by Jacqueline K. Ogburn.

Rydr is on a train heading east, leaving California, where her gramma can’t take care of her anymore, and traveling to Chicago to live with an unknown relative. She brings with her a suitcase, memories both happy and sad, and a box containing something very important.

As Rydr meets her fellow passengers and learns their stories, her own past begins to emerge. And as much as Rydr may want to forget about her life in California, on the train she finds that maybe her past can help her deal with her present. And maybe hope and forgiveness are all around her and, most important, within her, if she’s willing to look for it. 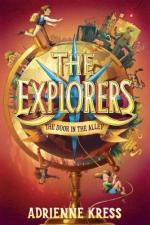 The Door in the Alley (The Explorers #1) by Adrienne Kress
Publication: April 25, 2017 by Delacorte Press
Book Description:

Featuring a mysterious society, a secretive past, and a pig in a teeny hat, “The Explorers: The Door in the Alley” is the first book in a new series for fans of “The Name of This Book Is a Secret” and “The Mysterious Benedict Society. “Knock once if you can find it but only members are allowed inside.

This is one of those stories that start with a pig in a teeny hat. It s not the one you re thinking about. (This story is way better than that one.) This pig-in-a-teeny-hat story starts when a very uninquisitive boy stumbles upon a very mysterious society. After that, there is danger and adventure; there are missing persons, hired thugs, a hidden box, a lost map, and famous explorers; and there is a girl looking for help that only uninquisitive boys can offer.

What do you do when you lose everything that means anything?

Nine-year old Lemonade Liberty Witt doesn’t know the answer to that question, except what her mom taught her. When life gives you lemons, you make lemonade. But what if those lemons are so big that you forget how? How do you make lemonade out of having to leave everything you know in San Francisco to move to the small town of Willow Creek, California and live with a grandfather you’ve never even met? In a town that smells like grass and mud and bugs. With tall pines instead of skyscrapers and dirt instead of sidewalks. Not to mention one woolly beast lurking in the woods.

That’s right, Bigfoot. A ginormous wooden statue of the ugly thing stands right at the center of town like he’s someone real important, like the mayor or something. And the people here actually believe he’s real and hiding somewhere out in the pine filled forests. How can anyone possibly be expected to make lemonade out those rotten lemons?

For years people have claimed to see a mysterious white deer in the woods around Chinaberry Creek. It always gets away.One evening, Eric Harper thinks he spots it. But a deer doesn’t have a coat that shimmers like a pearl. And a deer certainly isn’t born with an ivory horn curling from its forehead.

When Eric discovers the unicorn is hurt and being taken care of by the vet next door and her daughter, Allegra, his life is transformed. A tender tale of love, loss, and the connections we make, The Unicorn in the Barn shows us that sometimes ordinary life takes extraordinary turns. 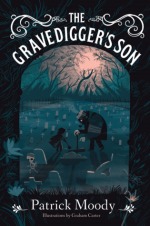 Ian Fossor is last in a long line of Gravediggers. It’s his family’s job to bury the dead and then, when Called by the dearly departed, to help settle the worries that linger beyond the grave so spirits can find peace in the Beyond.

But Ian doesn’t want to help the dead—he wants to be a Healer and help the living. Such a wish is, of course, selfish and impossible. Fossors are Gravediggers. So he reluctantly continues his training under the careful watch of his undead mentor, hoping every day that he’s never Called and carefully avoiding the path that leads into the forbidden woods bordering the cemetery.

Just as Ian’s friend, Fiona, convinces him to talk to his father, they’re lured into the woods by a risen corpse that doesn’t want to play by the rules. There, the two are captured by a coven of Weavers, dark magic witches who want only two thing—to escape the murky woods where they’ve been banished, and to raise the dead and shift the balance of power back to themselves.

Only Ian can stop them. With a little help from his friends. And his long-dead ancestors.

Debut author Kristi Wientge tackles the uncomfortable—but all too relatable—subject of female body hair and self-esteem with this sweet and charming novel in the tradition of Judy Blume.

Karma Khullar is about to start middle school, and she is super nervous. Not just because it seems like her best friend has found a newer, blonder best friend. Or the fact that her home life is shaken up by the death of her dadima. Or even that her dad is the new stay-at-home parent, leading her mother to spend most of her time at work. But because she’s realized that she has seventeen hairs that have formed a mustache on her upper lip.

With everyone around her focused on other things, Karma is left to figure out what to make of her terrifyingly hairy surprise all on her own.