This week: all children’s fiction! A mish-mash of genres is on the roster, with everything from mystery, adventure, to contemporary titles. We have: The Secret Files of Fairday Morrow from Jessica Haight and Stephanie Robinson, which sounds like a delightful mystery; the well-reviewed contemporary title Family Game Night and Other Catastrophes by Mary E. Lambert; Insignificant Events in the Life of a Cactus by Dusti Bowling, which I’ve been reading tremendous early reviews for; Mrs. Smith’s Spy School for Girls by Beth McMullen which sounds like a zippy middle-grade Gallagher Girls; and Julie Bowe’s lovely sounding contemporary Big & Little Questions (According to Wren Jo Byrd). 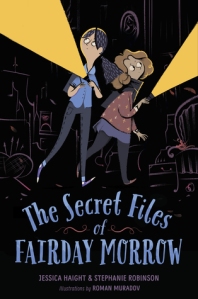 Fear Not the Unexpected.

Eleven-year-old Fairday Morrow is less than thrilled that her family is moving thousands of miles from civilization to the quiet country town of Ashpot, Connecticut, where she’s absolutely certain she’ll die of boredom.

As if leaving New York City and her best friend, Lizzy, the only other member of the elite Detective Mystery Squad (DMS), weren’t bad enough, Fairday is stuck living in the infamous Begonia House, a creepy old Victorian with dark passageways, a gigantic dead willow tree, and a mysterious past.

Before she can even unpack, strange music coming from behind a padlocked door leads Fairday up a spiral staircase and into a secret room, where an ancient mirror, a brass key, and a strange picture of a red-haired lady are the first in a series of clues that takes the members of the Detective Mystery Squad on an amazing adventure.

Annabelle has a five mile rule: She must keep her friends from coming within five miles of her home. That’s because Annabelle’s mom is a hoarder. Their house is full of stuff: canned goods, broken toys, old newspapers… It’s everywhere except for Annabelle’s spotless room. Annabelle can’t let anyone find out what her house is like. They’ll realize that her mom is crazy. They’ll make fun of her. Or feel sorry for her. Or try to help.

But when the newspaper piles come crashing down on her sister’s head one morning, it kicks off an epic fight between her parents that ends up with her dad taking off — and her fix-it-all grandmother stepping in.

As Annabelle realizes how bad things have gotten for her little sister, while trying to navigate her first crush, not to mention stay sane herself, she’s forced to come to terms with the fact that maybe she can’t keep all her secrets to herself. Maybe she can’t just throw her mom’s things out… maybe she has to let some people in.

It’s the start of a new school year and Wren Jo Byrd is worried that everyone will find out her parents separated over the summer. No one knows the truth, not even her best friend, Amber. When even her new teacher refers to her mom as Mrs. Byrd, Wren decides to keep their divorce a total secret. But something else changed over the summer: A new girl named Marianna moved to town and wants to be Amber’s next bff. And because of her fib, Wren can’t do anything about it. From take-out dinners with Mom to the tiny room she gets at Dad’s new place, nothing is the same for Wren anymore. But while Marianna makes everything harder at first, Wren soon learns that Marianna once had to ask many of the same questions–the big ones, as well as the little ones–that Wren is asking now. 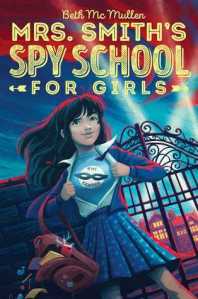 Mrs. Smith’s Spy School for Girls by Beth McMullen
Publication: July 4, 2017 by Aladdin
Book Description:
A girl discovers her boarding school is actually an elite spy-training program, and she must learn the skills of the trade in order to find her mother in this action-packed middle grade debut.

After a botched escape plan from her boarding school, Abigail is stunned to discover the school is actually a cover for an elite spy ring called The Center, along with being training grounds for future spies. Even more shocking? Abigail’s mother is a top agent for The Center and she has gone MIA, with valuable information that many people would like to have—at any cost. Along with a former nemesis and charming boy from her grade, Abigail goes through a crash course in Spy Training 101, often with hilarious—and sometimes painful—results. But Abigail realizes she might be a better spy-in-training than she thought—and the answers to her mother’s whereabouts are a lot closer than she thinks…

Insignificant Events in the Life of a Cactus by Dusti Bowling
Expected publication: September 5, 2017 by Sterling Children’s Books
Book Description:

Aven Green loves to tell people that she lost her arms in an alligator wrestling match, or a wildfire in Tanzania, but the truth is she was born without them. And when her parents take a job running Stagecoach Pass, a rundown western theme park in Arizona, Aven moves with them across the country knowing that she’ll have to answer the question over and over again.

Her new life takes an unexpected turn when she bonds with Connor, a classmate who also feels isolated because of his own disability, and they discover a room at Stagecoach Pass that holds bigger secrets than Aven ever could have imagined. It’s hard to solve a mystery, help a friend, and face your worst fears. But Aven’s about to discover she can do it all . . . even without arms.