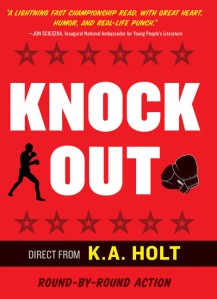 Levi just wants to be treated like a typical kid. As a baby, he had a serious disease that caused him respiratory issues. He’s fine now, but his mom and overprotective brother still think of him as damaged, and his schoolmates see him as the same class clown he’s always been. He feels stuck. So when his dad-divorced from his mom-suggests he take up boxing, he falls in love with the sport. And when he finds out about a school with a killer boxing team and a free-study curriculum, it feels like he’s found a ticket to a new Levi. But how can he tell his mom about boxing? And how can he convince his family to set him free?

Surprise!
I make them laugh.
I make them point.
That way
the tightrope is mine
to control.

The excellence of middle grade literature continues! So far this year, I’ve had the pleasure of reading a number of terrific, moving, unique children’s fiction titles, and that train of awesome continued with my back-to-back reading of K.A. Holt’s House Arrest and Knockout. A companion novel-in-verse to 2015’s House Arrest, Knockout tells the story of twelve-year-old Levi Davidson as he begins a tumultuous and audacious year.

Knockout is told in the first-person narrative of Levi. We are introduced to Levi and his world as he sets himself up to begin grade seven alongside his best friend Tam. Levi and Tam met back in kindergarten and discovered commonalities: both were born premature at two pounds and required an inhaler. However, as Levi tells us, the differences are vast. Levi had a trach as a child; his life has been in and out of hospitals, with him still having to go for major annual checkups. His mom (divorced from his dad) and Timothy continue to hover and set boundaries, watching, warning, and pleading with Levi to be careful. To always be safe. When Levi’s dad suggest that Levi try a sport, he doesn’t expect to fall in love with boxing, but he does. Levi discovers a raw aptitude for boxing; surprising everyone with tenacity and lightening speed that make up for his lack of height and slight build. As Levi’s year marches on, he continues to hide boxing from Tam, his mom and brother-who would be terrified for his health- until one boxing accident lands him in the hospital, injured, vulnerable and with lies unveiled. As with House Arrest, Knockout is utterly compelling from opening to ending- Holt’s writing is beautiful and seamless. Levi’s voice is unforgettable here, and readers get to experience his fears, his mistakes with Tam, his highs, and hopes for a more independent future at a sports-focused school through dynamic and heartbreaking verse. Especially moving throughout the novel are the extraordinary moments and reveals between Timothy and Levi, which we get to read via their written exchanges to one another.

I take out an earbud
offer it to Timothy
and we listen together
head to head,
song after song,
the same music as always, and yet…
different now.

Overall, Knockout is terrific- profound, wise and funny, told in a blistering pace that wonderfully allows for both consequential and quiet moments to permeate. Readers who previously read and loved K.A. Holt’s House Arrest might definitely be itching to read more about the Davidson boys- and to find out what Timothy is up to in his twenties! It is probably not necessary to have read House Arrest prior to Knockout, though I personally loved having read Timothy’s story first and having been introduced to Levi when he was a baby. It’s a win either way to get to read two tremendous, affecting and memorable books! Readers looking for more novels in verse in the vein of Kwame Alexander, or those who like authors such as Kate Messner, Beth Vrabel, Leslie Connor or Lisa Graff might especially love K.A. Holt’s Knockout.

I received a copy of Knockout courtesy of Raincoast Books in exchange for an honest review. All opinions and comments are my own.