I am delighted to be hosting a fun and generous giveaway courtesy of partner Simon & Schuster! Read on for my thoughts about book three in Rachel Renée Russell‘s New York Times bestselling The Misadventures of Max Crumbly series, Masters of Mischief, as well as information on how to enter to win an awesome prize pack (open to US addresses)!

Masters of Mischief (The Misadventures of Max Crumbly #3) by Rachel Renée Russell
Publication: June 4, 2019 by Simon & Schuster
Recommended for ages 9 – 13

About The Misadventures of Max Crumbly #3: Masters of Mischief

Max Crumbly is BACK!

From #1 New York Times bestselling Dork Diaries author Rachel Renée Russell comes the third book in a series about Max Crumbly and his daily ups and downs in middle school.

When we last left our courageous hero, Max Crumbly, and his trusty sidekick Erin, they had just finished foiling the plans of some bumbling thieves. But Max and Erin were trapped in a smelly, dangerous dumpster of doom and about to be discovered by the last people they wanted to find them.

Now in this latest installment of Max’s journals, Max and Erin face foes both new and old as their misadventures continue. Can the two friends avoid detection—and detention!—while keeping South Ridge Middle School safe from bullies and criminals?

Author Rachel Renée Russell returns with the third book in the bestselling The Misadventures of Max Crumbly series, Masters of Mischief. You will probably be familiar with the name of author Rachel Renée Russell as the creator behind the tremendously popular and much-loved illustrated middle grade series Dork Diaries. The Max Crumbly series takes place in the world of Dork Diaries, but with a focus on a different set of characters and protagonist/hero Max Crumbly leading the way.

“I knew middle school was going to be really hard, but I never expected to be BURIED ALICE in a DUMPSTER full of ROTTING GARBAGE, wearing an ICE PRINCESS COSTUME and BIKER BOOTS!”

In first-person narrative- through Max’s journal entries- Masters of Mischief begins right where the climax of book two, Middle School Mayhem, left off. Max and his friend (and very, very, secret crush) Erin find themselves stuck in a horribly icky and smelly dumpster on school property after thinking they have foiled the plans of three loud, oafish and scheming burglars who were attempting to steal school property. After a nail-biting, smelly, and funny turn after turn of events, Max and Erin find themselves free of the dumpster…but facing the possibility of a lifetime of being grounded or in detention! As Max and Erin try to stay ahead of the trio of burglars, the troupe of thieves very brashly and very boldly return to the scene of the crime (!) and the crime-fighting duo finds themselves in yet another incredibly tight and dangerous situation. The ending leaves on quite a clang of cliffhanger (Max had warned readers that it would!), and it will likely leave readers clamoring to read the next book.

Masters of Mischief is rollicking and fast- highly, highly entertaining and readable- beginning to end. I would say that while it is not totally essential to have read the first two titles in the series (and I had not!), I would still recommend it- to get a better sense of characters and prior events. Readers who have read through the Dork Diaries series may of course adore this series, but readers who haven’t read the Dork Diaries series and are looking for more fun illustrated novels to try out, I would give this one a whirl! The boldly-lined illustrations (done, as I learned from the Acknowledgements, by Rachel Renée Russell’s daughter Nikki Russell!) interspersed within the journal-format are super appealing and add a great action-adventure graphic touch to the books. Masters of Mischief is tight and zippy, packed with zany detours and adventures, with an energetic, sometimes jinxed, sometimes super-winning young protagonist in Max and an awesomely talented and stalwart friend in Erin…and the promise of more series entries to come! 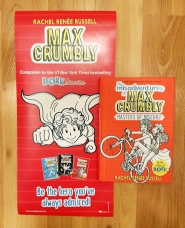 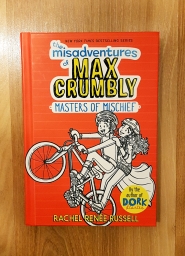 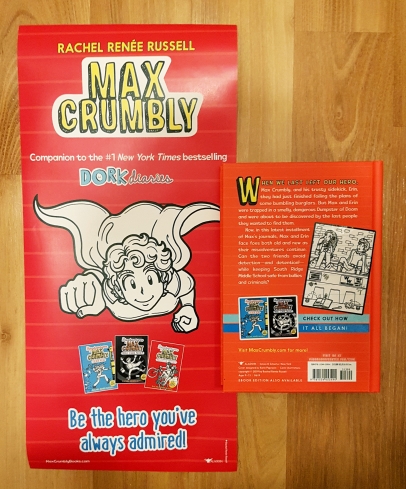 ABOUT THE SERIES:
Be the hero you’ve always admired!

Set in the world of the mega-hit series Dork Diaries, The Misadventures of Max Crumbly stars Max Crumbly, friend to Nikki Maxwell of Dork Diaries, who goes to a different school and manages to get into a whole lot of trouble. The series is written in diary format with illustrations and doodles of Max’s mishaps.

In the beginning of the series, Max starts at a new middle school and faces the school bully who has begun a habit of stuffing Max into his locker. Max wants nothing more than to be like his comic superhero idols and though his ability to smell pizza from a block away isn’t exactly a superpower, he’s still going to try to be the hero his school needs!

While fans of Dork Diaries will be familiar with the format and enjoy new stories from the same world, this series featuring a male protagonist will also appeal to boy readers. As in Dork Diaries, the characters make up a wide range of diversity. And also like Dork Diaries, The Misadventures of Max Crumbly series is about embracing who you are and having a ton of fun along the way! 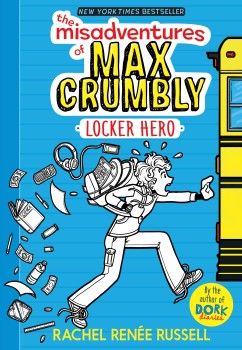 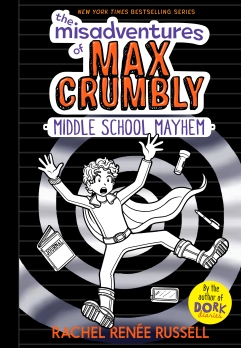 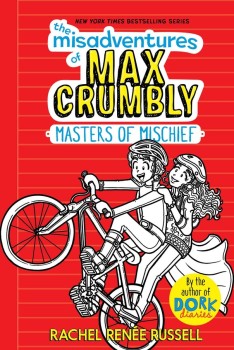 ABOUT THE AUTHOR
Rachel Renée Russell is an attorney who prefers writing tween books to legal briefs. (Mainly because books are a lot more fun and pajamas and bunny slippers aren’t allowed in court.) She is the #1 New York Times bestselling author of the block buster book series Dork Diaries and the exciting new series The Misadventures of Max Crumbly. There are more than 25 million copies of her books in print worldwide, and they have been translated into thirty-four languages. She enjoys working with her two daughters, Erin and Nikki, who help write and illustrate her books. Rachel lives in Chantilly, Virginia. 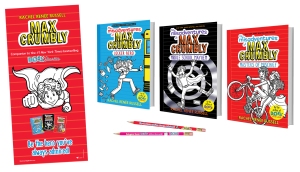 There’s a New Dork in Town!
One (1) winner receives:

Giveaway open to US addresses only. The giveaway will be open from June 17, 2019 to June 30, 2019. The winning entry will be randomly drawn via Rafflecopter, and the winner will have 48 hours to get in touch with me via email, Twitter, or Facebook confirming their US mailing address, or another entry will be drawn. Prizing and samples provided by Simon & Schuster.

I received a copy of this title courtesy of partner Simon & Schuster in exchange for an honest review and for the purposes of this blog post. All opinions and comments are my own. Prizing fulfilled by publisher.