Admittedly, there are indeed a number of book genres that I love- but children’s graphic novels hold a special spot in my reader’s and librarian’s heart. I cannot even count the number of times I’ve had a caregiver or self-described reluctant reader come ask me for reader’s advisory help and graphic novels (or comics) have been a huge (HUGE) ray of hope for both kid and adult. It breaks my heart if I hear an adult- or heaven forbid, a teacher- say they don’t ‘count’ graphic novels as reading. NOOOOO!!! I want to scream. In a roundabout way, I guess what I’m trying to say is: graphic novels for children (and all-ages) rock and definitely count as reading. These are ones I’ve recently read, enjoyed tremendously and would recommend: 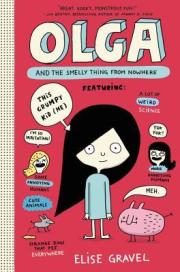 Olga and the Smelly Thing From Nowhere by Elise Gravel
Publication: March 14, 2017 by HarperCollins
I have spoken/written about my love of Elise Gravel‘s work a few times before. The Montreal-based author/illustrator is the force behind the wonderful non-fiction Disgusting Creatures series, as well as the terrifically fun picture books I Want a Monster! and The Cranky Ballerina. Gravel’s foray into longer format graphic novels starts off wonderfully with Olga and the Smelly Thing for Nowhere. Bringing together her signature style of bold, bright illustrations and kooky characters and a love of science/creatures, this graphic novel tells the story of what happens when aspiring zoologist Olga finds a supremely cute and stinky creature (possibly from another planet?) she names Meh. Funny and a little subversive, with the promise of MORE Olga and Meh to come in future entries! Animal enthusiasts, or fans of Ashley Spires’ Binky series or Fluffy Strikes Back, or Victoria Jamieson’s Pets on the Loose might especially LOVE this graphic novel. 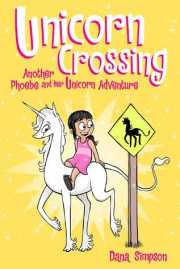 Unicorn Crossing (Heavenly Nostrils #5) by Dana Simpson
Publication: March 28, 2017 by Andrews McMeel Publishing
I have also written about my love of the Heavenly Nostrils series from Dana Simpson before! This series is a go-to suggestion I give to kids (or parents searching on behalf of their children) looking for a funny graphic novel series that won’t intimidate but rather inspire major fun and enjoyment with their reading. Already five (!) books into this great series, Simpson continues to mix her magic blend of humour, heart, and unicorn sparkle. I have previously mentioned that when I first picked up Heavenly Nostrils, I could see a definite kinship to Calvin & Hobbes. The more I read of Simpson’s series the more it wonderfully seems to grow Marigold and Phoebe’s bond (yes, akin to Calvin & Hobbes) in addition to cultivating its own, distinctively beautiful and funny world of magical realism. A must-read for graphic novel and comic strip enthusiasts who enjoy the work of Raina Telgemeier, Victoria Jamieson, Frank Cammuso, Ben Katke, Andy Runton, Sara Varon, James Burks and other similar authors. 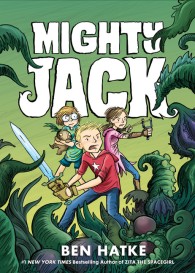 Mighty Jack (Volume 1) by Ben Hatke*
Publication: September 6, 2016 by First Second
Well, this post is clearly leaning towards authors and series I adore and have mentioned before! Third on the list here we have Ben Hatke’s Mighty Jack, the first volume in the Mighty Jack series. Hatke, author-illustrator of the awesome Zita the Spacegirl series, Nobody Likes a Goblin and Little Robot, returns with another fantastical and magical series. A retelling (and wholly unique) take on the fairytale Jack and the Beanstalk, Hatke- fascinatingly and thoughtfully- incorporates a modern setting, a neuroatypical co-heroine, and mythical elements into his version. I have been sitting on this review for a little while now- why, I am not entirely sure, but thoughts about Mighty Jack have been marinating for a bit. As always, Hatke knocks it out of the park with his gorgeous artwork, female lead characters, and his approach to animating inanimate objects. My initial reaction upon finishing was that I would have liked a bit more text/back story to Jack, Molly and family (the story is so good and I was clamoring for more!), and a few ends were left a bit looser than I would have liked (even with the knowledge that this was just book one!)…and while some points stand upon reread, I enjoyed it more upon reread and consider Mighty Jack to be a highly recommended read- another great addition to Hatke’s roster. The promise of Mighty Jack and the Goblin King has me excited to read even more about Jack, Molly, and Lilly! 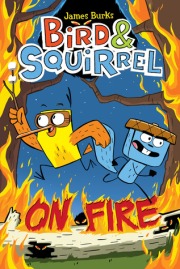 Bird & Squirrel on Fire (Bird & Squirrel #4) by James Burks
Publication: January 31, 2017 by GRAPHIX
Tom and Jerry. Garfield and Odie. Gerald and Piggie. Pinky and the Brain. Wile E. Coyote and Roadrunner. A lot of characters in shows and books that we tend to love and think of fondly are in pairs. In the children’s graphic novel genre, there is an entry in the prestige pairs group with James Burks’ Bird & Squirrel. Now four books into this funny and adventure-filled series, Bird is, as ever, our stalwart optimist and cheerleader; Squirrel, while having his courage mightily tested a few times over, remains trepidatious and safety-focuses. In this latest entry, Bird and Squirrel come up against a dyspeptic, slightly bonkers giant beaver who wants to keep ALL the water in the forest for himself- all the while planning a party (Bird’s idea), investigating animal disappearances, and Squirrel meeting a new character named Red (who could be the love of his life). As with his previous work in Gabby & Gator (which I love!) and the other Bird & Squirrel titles, Burks combines goofy, wacky characters with hair-raising moments and/or scary creatures- but all toward good endings. I adore Burks’ style of artwork and the storytelling in Bird & Squirrel; I hope we get at least a handful more adventures about this duo! 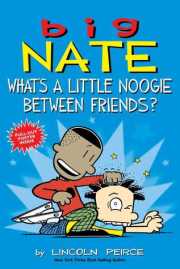 Big Nate: What’s a Little Noogie Between Friends? (Big Nate) by Lincoln Peirce
Publication: February 28, 2017 by Andrews McMeel Publishing
There is a lot of love in the bookish world of the Big Nate series of books by Lincoln Peirce. It is one of those series of books that, like anything Garfield or Raina Telgemeier, is barely in the library before WHOOSH back out it goes! I do not remember reading the Big Nate series when it first came out, but have, over the last number of years, become a big reader (and suggester!) of the books. Nate is one of those middle school protagonists that we love to root for- he’s imperfect, gets into trouble, gets in fights with his friends, has unrequited crushes, has a core of two best friends who tease him and call him out when he’s being ridiculous– I could go on. There is something totally appealing (dare I say, comforting?) about this series and Nate’s world. While I have definitely preferred certain graphic novel entries more than others in the Big Nate series, What’s a Little Noogie Between Friends? has a good share of the silly (more Spitsy and baseball craziness) and somewhat serious (with Nate having to say goodbye to a classmate who is moving).

*I received a copy of Might Jack courtesy of Raincoast Books in exchange for an honest review. All opinions and comments are my own.