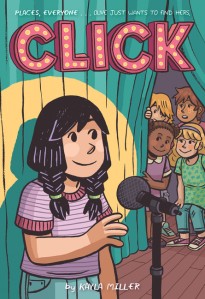 For fans of Smile and Real Friends comes a debut graphic novel about friendship and finding where you click” in middle school.

Olive “clicks” with everyone in the fifth grade-until one day she doesn’t. When a school variety show leaves Olive stranded without an act to join, she begins to panic, wondering why all her friends have already formed their own groups . . . without her. With the performance drawing closer by the minute, will Olive be able to find her own place in the show before the curtain comes up?

Author-illustrator Kayla Miller has woven together a heartfelt and insightful story about navigating friendships, leaning on family, and learning to take the stage in the most important role of all.

“I don’t want to have to ask to be included! I want someone to want me in their group. I feel like I have all these friends but everyone has other friends they like better than me.”

The strong and utterly charming graphic novel debut from author-illustrator Kayla Miller, Click tells the story of fifth grader Olive as she tries to navigate her place among different groups of friends as a big school event looms.

When it’s announced by their teacher Mr. Florez that the fifth grade is going to prepare for a major variety show, Olive and her friends are ecstatic. As Olive and her groups of friends quickly start imagining what sorts of amazing talents and skills they’ll put on show, it slowly but surely becomes apparent that all of Olive’s friends have planned their sets out- with other friends. For example, her good friends Beth and Chanda are planning on lip-syncing a popular song, and her good friends Willow and Hugh plan on performing a mini magic-show. Everyone else Olive is friends with has someone else they are working with on an act! But…where does that leave Olive? Feeling letdown and confused, Olive lays out her worries to her mom and her Aunt Molly (with whom she has a close relationship): either she’s never going to find her clique- a close knit group friends she “clicks” with, shares all the same interests with and spends her time with- or she’s soon going to have to choose which one group she wants to belong to.

A fun and enlightening sleepover at her aunt’s place, however, provides Olive with some major inspiration in discovering what she truly wants to do for the variety show: taking on a role that at once stands out, plays to Olive’s strengths yet also enables Olive to support all of her groups of friends. Olive experiences some ripples among a few friends and with her mom after announcing her intentions for the variety show, but Miller does a beautiful job in keeping the focus steadily on Olive (and her dedication to her new and major role) as well as in highlighting that it’s pretty awesome and special (and possible!) to be genuine friends with multiple groups of people who have cool and diverse interests.

Overall, what a terrifically told and illustrated graphic novel from Kayla Miller! It was such a pleasure to read Click; all at once so thoughtful and clever, relatable and extremely appealing in terms of its overall design and aesthetic. Readers and fans of graphic novels by Victoria Jamieson, Svetlana Chmakova, Lincoln Peirce, or Raina Telgemeier will likely fall in love with Olive and her story. Look forward to more adventures featuring Olive and her friends in Camp, a follow-up to Click, to be released April 2019 (coming up soon!). 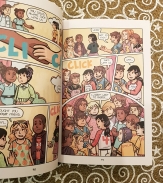 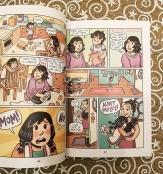 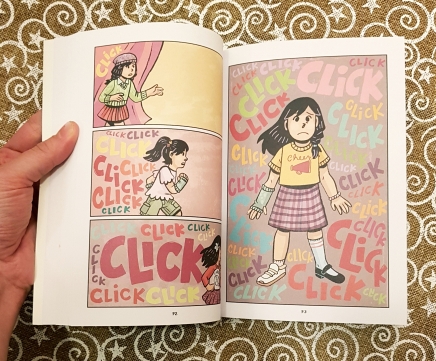